Background: The major cause of pulpal and periapical diseases are living and non living irritants. The living irritants include various microorganisms including bacteria, yeast and viruses. The success of endondotic treatment depends on eradication of these microorganisms and prevention of reinfection. Mechanical instrumentation alone does not result in microorganism free root canal system, due to complex root canal anatomy. Thus, irrigants are essential to ensure microbial minimization and elimination of organic tissue remnants. Qmix irrigating solution used as a final rinse after bleach for one step smear layer removal and disinfection and eliminate greater than 99.99% of planktonic bacteria including the resistant species E.faecalis.

Objective: The aim of this invitro study is to evaluate the antimicrobial efficacy of qmix irrigant in infected root canal system.

Material and Methods: Crowns of 60 extracted premolar teeth were sectioned at the cemento‑enamel junction. The samples were stored temporarily in physiological saline solution. The canals were shaped using crown down technique upto F3 protaper file. Enterococcus faecalis was inoculated on Brain heart infusion (BHI) agar plate and incubated anaerobically at 37 °C for 24 h. After incubation, the specimens were removed and then rinsed. In the negative group (n=20), there was no treatment. In the other group (n=20), the sections were irrigated with 5 mL of 5.25% NaOCl for 60 s. The third group (n=20) is treated with Qmix solution for 60-90 seconds. After the disinfection procedures, samples were subjected to CFU-counting evaluations.

Results: After irrigation, the elimination of bacteria and the smear layer in the positive group were significantly superior, compared with the negative group (p<0.01). In the Qmix group, bacterial reduction reached nearly 100% on the surfaces of root canals; live bacteria were rarely observed.

It is well established that the elimination of pathogens from root canals during endodontic treatment is difficult1, 2 and current endodontic techniques are unable to consistently disinfect the canal.3, 4 Mechanical preparation of the canal leaves a smear layer on the surface of the canal wall occluding the entrances to any patent dentinal tubules.5 Furthermore it is a site for accumulation of bacteria within the layer itself. This together with the irregular cross section of the canal and complex internal anatomical morphology6 result in areas where residual bacteria can accumulate and adversely affect the outcome of any endodontic therapy.7 Irrigating solutions used during root canal treatment act through direct contact with the bacteria targeted and offer long term antibacterial effect (substantivity).8 Other desirable properties for an ideal irrigant include the ability to dissolve pulp tissue and inactivate endotoxins.9, 10 The irrigants that are currently used during cleaning and shaping can be divided into antibacterial and decalcifying agents or combinations. They include sodium hypochlorite (NaOCl), chlorhexidine, ethylene diamine tetra acetic acid (EDTA), mixture of tetracycline, an acid and detergent (MTAD).11 Qmix irrigating solution is a single solution used as final rinse after bleach for one-step smear layer removal and disinfection.12, 13 Its nonantibiotic, premixed formula provides a “best practice” irrigation protocol in fewer steps for proven and effective irrigation made easy. It contain a mixture of a bisbiguanide antimicrobial agent, a polyaminocarboxylic acid calcium-chelating agent, and a surfactant, and has been found to be effective against bacterial biofilms. Its excellent bacteria killing properties eliminate greater than 99.99% of planktonic bacteria including resistant species Enterococcus faecalis and candida albicans.14

The strains of microorganisms used for the study were standard strains of E.faecalis which were sub‑cultured in agar plate (selective medium) and was incubated at 37°C for 24 h.

A pure, single E. fecalis colony was isolated from the same cultured plate and Gram’s staining was done to confirm its growth, which was observed under microscope and then inoculated with a brain heart infusion (BHI) broth. The BHI broth was incubated at 37°C for a 24‑h period and checked for bacterial growth by changes in turbidity. A drop of BHI containing E. fecalis was placed into saline solution and checked for correct bacterial concentration.

The teeth were randomly assigned to three groups and placed into nutrient broth containing bacterial suspension.

Group A received no irrigation. Specimens of Groups B and C were treated with sodium hypochlorite and Qmix irrigating solutions respectively. After irrigation the teeth were placed in vials, which contained 2 mL of the nutrient broth.

The vials were incubated at 37°C for 24 h. The vials were checked for turbidity after 24 h incubation. Overall 6 mL of broth from all the samples together was collected and seeded on a Petri dish containing UTI Hichrome agar in order to count the CFUs. Incubation lasted 48 h at 37°C. Grown colonies were seen in all groups and were identified by standard methods.

Qmix yielded most pronounced effect on smear layer removal as compared to NaOCl Statistical analysis used was the simple proportion. The mean numbers of viable organisms of groups were: Group A: 251/205, Group B: 84/205 and Group C: 15/205. Higher numbers of microbial colonies were recorded in Group A as compared to Group B followed by Group C, respectively. 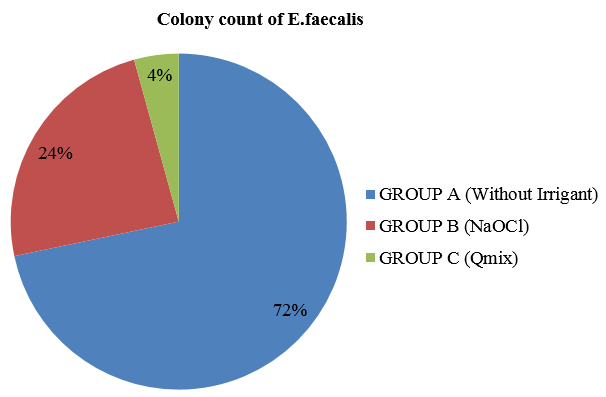 Infections of the root canal system consist of poly microbial flora with approximately equal proportions of gram‑positive and gram‑negative bacteria. 15, 16 Its removal/neutralization from infected root canals during the endodontic treatment seems to be important for the healing process of the periapical tissues with the effect of auxiliary chemical substances in root canals such as EDTA and QMix. 17 Stojicic et al. reported that QMix effectively killed E. faecalis biofilms grown on collagen-coated hydroxyapatite discs in vitro, and was superior to CHX and MTAD. QMix was known for its single irrigant that has both antibacterial and smear layer removal properties. 18, 19 Few studies showed that 5% to 6% NaOCl was more effective than QMix against E.faecalis biofilm when 1 mL was used for 1 and 3 minutes. QMix showed better antibacterial property compared to NaOCl, when it was employed for longer exposure time and at higher volume. 20 Considering all the materials, QMix showed higher antimicrobial activity compared to 17% EDTA, tetraclean, saline, 2% CHX, MTAD, 0.2% Cetrimide, Silver Sol/H2O2 and lasers. CFU methodology has been widely used for microbiological analysis of bacteria inside the dentinal tubules. Although it was able to provide a reading of the bacterial colony that had invaded the dentinal tubules, it was unable to analyze the spatial distribution and viability of the bacteria.21 Sodium hypochlorite has been widely used as an auxiliary chemical substance. Beside its bleaching and tissue dissolution effects, sodium hypochlorite have been proven as an effective disinfectant. On the other hand, chlorhexidine is a biocompatible agent that has the antimicrobial action associated with substantivity. However, a clinical study concluded that NaOCl and CHX have no detoxifying effect on endotoxins, and that the removal of more than 47% of the bacterial lipopolysaccharide content. 22 The action of EDTA on exposing the deep layers of contaminated dentin may improve LPS release by dentin, increasing its recovery rates. QMix has been employed after the root canal cleaning and disinfection. It comprises an aqueous solution of EDTA, chlorhexidine and N-cetyl-N,N,N trimethylammonium bromide. Furthermore, it was demonstrated that QMix promoted additional antimicrobial action, especially in longer period (>1 minute). There is no study that reported the effect of QMix over the endotoxic content within root canals. According to the study, QMix had the potential to reduce bacterial content from the root canal when compared to the other irrigants. The presence of a high amount of surfactant and EDTA in QMix composition may explain the great ability of this solution to remove the biofilm cells from a substrate. 23

A novel dual-function endodontic irrigating solution, QMix was evaluated for its ability to remove smear layer and kill bacteria in vitro. The proprietary solution demonstrated the ability to completely remove the smear layer and kill Enterococcus faecalis. The antimicrobial efficacy of Qmix, NaOCl were effective, comparable, and reliable. QMix, a novel single irrigant, demonstrated potential as a final irrigant for root canals due to its advantages of easy manipulation and efficient antimicrobial properties.