Rehabilitating extensively mutilated posterior teeth after endodontic treatment still remains to be a challenge. Several treatment modalities has been established to restore the function of grossly mutilated endodontically treated teeth. Among such restorations, endocrowns are indirect monobloc crowns that engage the core space for retention. They are more conservative alternative than the use of intraradicular post as a means to increase the retention of crown to the core. In this case report, two cases are discussed in which single posterior endocrowns were fabricated after the endodontic treatment in the teeth with compromised tooth structure. One case with CAD manufacturing of lithium disilicate (IPS e.max CAD) molar endocrown and another case with the fabrication of metal ceramic molar endocrown.

Losing a posterior tooth can be a devastating experience, especially in the young patients as it directly compromises the form, function and indirectly the esthetics of natural dentition.1 A successful endodontic therapy aims in conserving the natural tooth form and a successful post endodontic restoration should preserve the existing tooth structure by protecting it and restoring its function along with satisfactory esthetics.2

Usually due to chronic carious activity and dental negligence, patients end up with grossly decayed posterior teeth. Endodontic treatment followed by rehabilitating the function of such teeth is often considered as potential challenge for the clinician.3 Traditionally the function and esthetic recovery of such teeth were achieved by fabricating total crowns supported by cast metal cores. However, with the advent of bonding and adhesion in dentistry, intra radicular posts made of glass fibre were developed. The purpose of such post and core restorations is to stabilize and replace the coronal tooth structure.4

Though success rates of post and core restorations were high, there were numerous limitations of acquiring retention from roots through posts. Root perforations and unpredictable thinning of the root canal walls due to over preparation can be expected from the use of posts. Moreover, posts cannot be used in the teeth with dilacerated roots and severely calcified canals.5

In the desperate need of restoring such endodontically treated teeth with compromised tooth structure, Pissis in 1995 had first described Ceramic Monobloc Technique. The term Endocrown was coined to the same in 1999 by Bindl & Morman. Endocrowns are single monobloc restorations in which macro mechanical retention is achieved by internal walls of pulp chamber and micro mechanical retention achieved by adhesive cementation technique.6

In this case report, an endocrown was decided to restore grossly mutilated endodontically treated posterior tooth in two patients with fabrication of lithium disilicate CAD and metal ceramic crowns respectively.

A 22 year old male patient reported to the department of conservative dentistry and Endodontics, Sharavathi dental college and hospital, Shimoga with chief complaint of decayed tooth in the right lower back region of the jaw since two years. On clinical examination, a grossly carious tooth with extensive coronal destruction and thin remaining walls with reduced crown length was observed with right mandibular first molar. Tooth exhibited mild tenderness on vertical percussion and had history of frequent dull lingering pain. On radiographic examination, there was a radiolucency involving pulp with periapical widening and discontinuous lamina dura. Diagnosis was made as chronic irreversible pulpitis with apical periodontitis and endodontic therapy followed by endocrown restoration was planned. The entire procedure was explained to the patient and a written consent was taken.

After administration of local anesthesia, Endodontic treatment was performed under rubber dam isolation. In the first visit, access opening was carried out after complete removal of caries and chemo mechanical preparation was done under copious irrigation with saline and 3% NaOCl. Patient was recalled after a week for second visit. Tooth was asymptomatic and was obturated with cold lateral compaction technique followed by application of thin layer of conventional glass ionomer cement (Ketec molar) to block undercuts and to achieve flat pulpal floor.

Tooth preparation was done by establishing a circular equigingival shoulder finish line margin with a non uniform ferrule of 1.5-2 mm around the tooth and central retentive pulp cavity of 4-5 mm depth. Occlusal preparation was carried out with round wheel diamond bur in axial direction by orienting the bur parallel to the long axis of the tooth and achieving an inter-occlusal space of 1.5-2 mm. Tooth preparation was followed by impression technique with polyvinyl siloxane material in putty wash technique. The endocrown was fabricated with lithium disilicate ceramic (IPS E.Max CAD). Prior to the cementation, the intaglio surface off finished restoration was treated with 5% Hydroflouric acid and silane coupling agent. Tooth was etched with 37% phosphoric acid followed by application of bonding agent and cementation was carried out with dual cure resin cement. Patient was recalled after 3rd, 6th and 12th month for follow up. 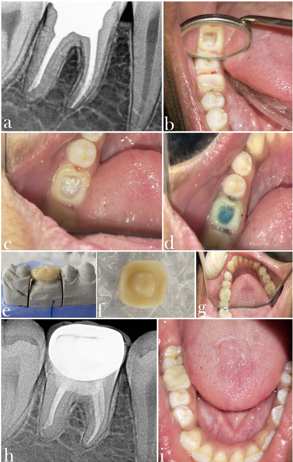 A 20 year old female patient reported to the department with a chief complaint of decayed tooth in the right lower back region of the jaw. On clinical examination right mandibular second molar exhibited gross carious lesion with extensive damage to the crown and mild tenderness on vertical percussion. On radiographic examination, radiolucency was observed involving pulp with discontinuous lamina dura and PDL widening. Diagnosis was made as chronic irreversible pulpitis with apical periodontitis. After obtaining the consent from the patient, Root canal treatment was performed. Based on the remaining tooth structure and occlusal evaluation endocrown restoration was decided as treatment option. Metal ceramic endocrown was chosen due to patient’s demands and severe economic constraints. The preparation and technique was performed as described in the previous case. Certain modifications were incorporated by retaining increased length of access cavity and conservative occlusal preparation to achieve maximal mechanical retention and stability for the core portion of endocrown. Cervical margins were finished with chamfer finish line and floor of the pulp chamber was made saddle shape to achieve utmost stability. Sand blasting of intaglio surface of endocrown was performed to enhance the retention followed by cementation with glass ionomer type 1 luting cement under proper isolation. Patient was recalled after 3rd, 6th and 12th month for follow up. 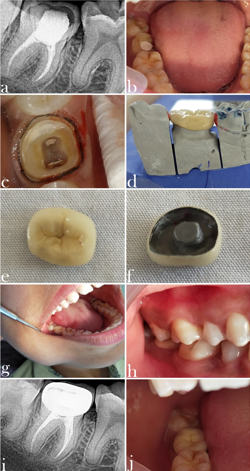 Along with a successful endodontic treatment, tooth requires an appropriate post endodontic restoration to revert its function back to normal. The concept of ideal restoration for endodontically treated teeth has always remained to be a challenge clinically. Especially in the tooth with large coronal damage, for reestablishing the function and form requires a careful assessment and treatment planning.7

For reinstating a molar tooth with large coronal damage, Endocrown treatment procedure can be considered as a conservative approach and one of the most feasible alternatives to traditional post and core restoration.8 Endocrowns are indicated in the cases with short clinical crowns, narrow canals and in thin fragile roots where it is not possible to attain retention through post placements. According to Biacchi and Basting in 2012, Greater resistance to compressive stresses was observed in endocrowns when compared with traditional crowns supported on fibreposts.9 Depth of the pulp chamber is very important criteria for case selection of endocrown, as in the teeth with depth of pulp chamber less than 3mm, adhesion as well as mechanical retention cannot be assured. In such cases endocrowns are not recommended.10

In the present case report both clinical cases met with set of indications required for the preparation of endocrown technique. Depth of the pulp chamber was 4 – 5 mm in both the cases with inter occlusal clearance space of 1.5 – 2mm. Apart from the depth of pulp chamber, Shape of the access cavity also matters as it provides the stability to the core portion of endocrown. Trapezoidal shape of access cavity in mandibular molars and triangular shape in maxillary molars extensively increase the retention of endocrowns making them as ideal choice in the teeth with intact pup chamber surrounded by 4 walls.11

In the present case report, both the cases were mandibular molars and had adequate depth of pulp chamber. Trapezoidal shaped access preparation acted as mechanical retention for both endocrowns and increased stability of restoration. This was in agreement with Dartora et al in 2018 that endocrows with more than 3mm extensions inside the pulp chamber presented low intensity and better stress distribution pattern compared to 1mm extension group. 12 Moreover there was high possibility of rotation in 1mm extension endocrowns denoting that more length and ideal shapes of pulp chamber may be acting as stability enhancer and as an anti-rotational axis.13

Previously, the procedure of endocrown technique was restricted to ceramic materials which were acid etched to achieve bond to the prepared tooth by adhesive cementation. But recently according to skalskyi et al it was shown that the use of metal ceramic as endocrown material may provide the lowest risk of failure during clinical use and had highest fracture strength. 14 In this report, one case was fabricated with lithium disilicate ceramic as it delivers high mechanical strength and has superior esthetics which would closely resemble tooth enamel. 15 According to Biacchi GR et al and Gresnigt MM et al endocrowns based of lithium disilicate ceramics are considered superior due to their adhesive properties and micromechanical interlocking with resin cement. Peripheral marginal anatomy of preparation is very important factor that decides the prognosis of any restoration.16, 17 In the first case Margins were finished with shoulder finish line, which was in acceptance with the study conducted by taha et al as endocrowns with shoulder finish lines had higher mean fracture resistance values.18

In contrast, second case was fabricated with metal ceramic as endocrown material due to patient’s economic factors. Though it lacked the feature of microretention as in the previous case, care was taken during the preparation to increase the retention by limiting the extent of reduction occlusually and also by reducing overall taper to achieve near parallel walls. Additionally cervical margins were levelled with chamfer throughout the entire circumference maintaining the continuity to enamel thereby providing better bond quality and reduction of cement interface to the oral environment.19 In this case floor of the pulp chamber was made saddle shape to enhance the retention and stability to the core portion of endocrown.10 Also sandblasting was carried out on intaglio surface that ensures utmost bonding, which was avoided in first case as it might lead to an adhesive failure due to compromised bonding.20

In 3rd, 6th and 12th month follow up, both the cases showed no esthetic and functional degradation on clinical as well as radiographic examination. It was similar with the results reported by bindl et al and lander et al, where endocrown showed excellent results in terms of form, function, stability and tissue preservation.5, 6

The success and longevity of endocrowns depends upon factors such as clinician skill, case selection, appropriate preparation technique and selection of material. Preferably choice of material for endocrowns should be limited to etchable ceramics, however in the case with lack of adhesive bonding and patient’s economic constraints, metal ceramic based endocrowns can be chosen as a alternative provided if the preparation is incorporated with additional retention and resistance features for successful outcome.