The aim of this report is to discuss a case about a failed root canal treated upper right lateral incisor presented with chronic periapical pathology with extruded guttapercha. Apicoectomy involves surgical management of a tooth with a periapical lesion, which cannot be resolved by routine endodontic treatment. The goal of apical surgery is to prevent leakage of bacteria and their byproducts from the root canal system into peri-radicular tissue. With the advancements in magnification, armamentaria and materials, the success rate of treatment outgrows. Hence, present study describes a case of retreatment successfully treated by endodontic periapical surgery.

Surgical endodontics is a time tested method for correcting those teeth with periapical lesions that donot respond well to conventional root canal treatment or when orthograde treatment is not viable.1 It aids to maintain the form, function and esthetics of the relevant teeth and their roots when conservative instrumental, pharmacotherapeutic and physiotherapeutic treatmentsfailed.

The primary objectives of surgical approach are to make the root canals free of diseased necrotic tissue, debride them thoroughly and to seal the cavity or defect to bring down the microorganism spread in the periradicular tissues, thus rendering an environment conducive of a normal periodontal apparatus regeneration. This goal should be attained by root-end resection, root- end cavity preparation, and a bacteria-tight closure at the apical end of the root-canal system with a retrograde filling. Besides, curettage plays an important role for debridement of the periapical pathological tissue in favour of removing any extra-radicular infection, foreign body material, or cystic tissue.2

According to the updated guidelines by the European Society of Endodontology, indications for apical surgery comprise.3

Contraindications of apicoectomy include:

The treatment success is qualified by major factors including the correct indication, the correct technique, the follow up and patient’s observance of the post-surgery recommendations. The treatment outcome of apical surgery needs periodic clinical and radiographic assessment.

This paper presents a case report of surgical removal of a periapical pathology due to failure of conventional endodontic treatment, persistence of pathology and sinus formation.

A 19 years old male patient reported to the Department of Conservative Dentistry & Endodontics, Jaipur Dental College and Hospital, Jaipur, with the chief complaint of pain, recurrent swelling, and pus discharge from the upper right front tooth region of the jaw. Patient notified a history of sports trauma 6 years ago and had then undergone root canal treatment. Also, he had an incomplete re- treatment attempt with the same tooth, 1 week back. Clinical examination revealed, the tooth #12 was tender to percussion and palpation, also there was presence of pus discharge from sinus tract near root tip, but no significant mobility (Figure 1). Radiographic examination revealed periapical radiolucency around root apex along with inadequate endodontic therapy with gutta-percha extruding periapically (Figure 2).

Based on clinical and radiographic examination, the case was diagnosed as the chronic periapical abscess.

After mouth preparation with povidine iodine rinse and swab, local anesthesia (2% lidocaine with 1: 100,000 epinephrine) was administered. Using 15c blade and bard parker handle, a sharp incision was madedeep into bone. A sulcular incisioninaddition to two vertical releasing incisions were given, and a full- thickness mucoperiosteal flap was raised.5Selection of the incision technique and flap design depends on clinical and radiographic parameters (Von ArxandSalvi,2008).4 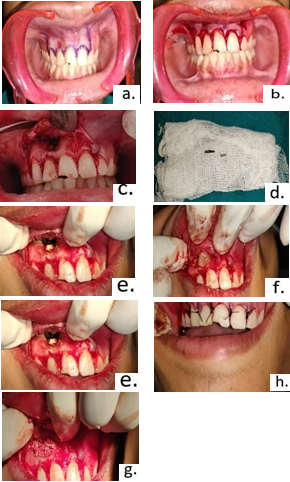 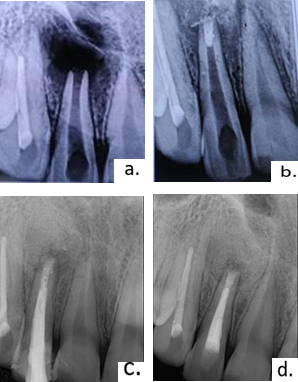 (a. Root resection, b. MTA Retrograde filling with bonegraft, c. Obturation d. Follow up at 6months)

After elevating the flap and inspecting, a breach in the cortical bone was located. A round carbide bur under constant irrigation for cooling was used to enlarge bony defect to the buccal window to gain access to the periapical lesion and root end of the tooth with defect.

Curettes were then used to remove the soft granulation tissue, which further aided in adequate visualization of root apex. Hemostasis was achieved with the use of sterile gauzes. The extruded gutta-percha, then clearly seen was removed out with a tweezer.

Apical end of 3mmwas resected at an acute angle of 10 degree in faciolingual direction to the long axis of tooth with a tapered fissure bur in high-speed handpiece, under constant irrigation. The cavity was then filled with retrograde filling material once it was isolated thoroughly. The material of choice for retrograde restoration was MTA because of its high success rate. It was placedinto the preparation up to 3- 4 mm apically with dovgan’s carrier and plugger to assure dense filling and minimal voids. A PRF and bone graft was placed in the bony defect to induce bone regeneration. Adaptation of filling material was confirmed by using radiograph.

Careful evaluation and copious irrigation with normal saline of the surgical field was done to ensure complete debridement of a hemostatic agent, root-end filling material, and debris, which may hinder the process of healing.

A damp gauze piece was slightly compressedto bring back the flap in position. Single interrupted sutures were given (Figure 4).

The histopathological report of the removed tissue showed a lesion covered by histiocytes with some neutrophils, macrophages, lymphocytes and plasma cells, showing compatibility with periapical granuloma wall.

The patient was then advised to follow post-operative instructions such as to apply cold compresses with an ice pack for the first 4–6 hours after surgery, followed by mouth rinses to maintain a good oral hygiene. The patient was also prescribed antibiotics and analgesics for 5 days. The patient was recalled after three days to access the surgical site for healing and the absence of signs and symptoms such as pain and sinus tract. After 7 days, post-operative, the suture was removed and root canal prepared coronal to the MTA placement was filled with gutta percha by lateral compaction technique followed by composite resin restoration on the same day. After complete procedure, the patient was then recalled at 3 months-6months-1 year to assess the clinical and radiographic signs of healing.

After 6 months follow up, there was absence of significant sign and symptoms clinically. Radiograph showed reduced lesion size with new bone formation at periapical area. After 12 months follow up, the offending tooth was accepted both functionally and aesthetically (Figure 4).

Apical lesions can occur or recur in dental organs with endodontic treatment when the root canal system has not been properly cleaned, shaped and disinfected by instrumentation and copious irrigation, or the absence of disinfection, or due to apical or coronal leakage.5

In this case, MTA was chosen as a retrograde filling material because of its ideal properties. It has easy and moisture independent application, biocompatibility, superior seal and ability to strengthen the root.6 With time, a new cementum deposition was found on the surface of the material. Literature reviews higher success rate in follow-up studies with MTA as root-end filling material.

In recent times, GTR techniques i.e. use of bone graft and barrier membranes in addition to endodontic surgeries has been used to promote bone healing.2 Freshly prepared PRF from patient’s whole blood was utilized as PRF being autologous biomaterial is a safe graft with absence of risks such as rejection or allergy.7, 8

PRF supports and encourages healing of wounds as well as reduces post-operative pain. Since the main objective of apical surgery is to avoid re-infection, the tight seal of the microstructures at apical end is a necessity to prevent egress of bacteria and toxins from the root-canal system into the periradicular tissues.4 Thus MTA was allowed to set completely and obturation of the remainder canal was preferred post- surgically and not during the surgery.

The entire procedure was carried under Galliean 3.2X loupes for better visuality, precision and outcome. Endodontic microsurgical techniques aided with operative microscope are more beneficial for better outcome for nowadays. The advantages of microsurgery include easier identification of root apices, smaller osteotomies and shallower resection angles that conserve cortical bone and root length. In addition, a respected root surface under high magnification and illumination readily reveals anatomical details of apical delta.9 Combined with the microscope, the ultrasonic instrument helps in conservative, coaxial root-end preparations and precise root-end fillings to satisfy the required mechanical and biological principles of endodontic surgery.

Anatomical study of the root apex showed that at least 3 mm of the root-end must be removed to reduce 98% of the apical ramifications and 93% of the lateral canals.10

Bogdan et al compared the outcomes of apicoectomy with traditional and modern concepts and suggested the clinical success rate after 1 year increased to 85-96.8% with microsurgery compared to 40-90% with traditional way.9 The success rate also depends on multiple factors including prognosis, size of periapical lesion, apical seal and techniques and materials used to treat the tooth. Moreover, use of CBCT enhances the pre and post-operative examination three dimensionally, providing better comparison with the site and size of actuallesion.11

Based on the contemporary understanding of endodontic concepts for success and failure, assessment, and subsequent treatment of apicoectomy procedures have greatly improved. Advancements in apicoectomy armamentaria and materials have enabled endodontists to treat challenging cases with much greater efficacy. The surgical technique, which has been, applied in this case i.e. apicoectomy, was appropriate and the results were satisfactory. Hence, apical surgery is a predictable option to save the tooth that is unmanageable by conventional, non- surgical endodontics.