The main objective of this case study is to present an unusual maxillary first molar root canal configuration with seven root canals; three mesiobuccal, two distobuccal and two palatal canals diagnosed during treatment procedure confirmed by Cone Beam Computed Tomography. A 26-year-old man with the chief complaint of spontaneous pain in his left posterior maxilla was referred to by his general dentist. From the clinical and radiographic results, a diagnosis of apical periodontitis was made and the patient was recommended for endodontic care. The CBCT axial images of the patient showed that the palatal and distobuccal roots have a type IV and type II canal pattern of Vertucci, respectively, while the mesiobuccal root showed a type XV canal configuration of Sert and Bayirli. Canals have been successfully treated with rotary files and filled using a single-cone technique. In endodontically difficult situations, the use of CBCT imaging will promote a deeper understanding of the intricate root canal anatomy, which essentially helps the clinician to more effectively explore the root canal system and clean, shape, and obturate it.

Due to their complex root canal anatomy, endodontic management of maxillary first molars exhibits a persistent challenge.1 A major cause of root canal failure is the inability to locate, debride, or properly fill all root canal system canals.2 A thorough understanding of the root canal system, and its frequent variations along with diagnosis and treatment planning, is an absolute requirement for successful endodontic treatment.3

Different studies investigate the root and root canal anatomy of different populations using different methods, such as sectioning, canal sectioning, and tooth clearing techniques, conventional radiography, digital radiographic techniques, contrast medium-enhanced radiography, and computed tomographic scanning. The "gold standard" for the assessment of canal morphology is the clearing method, where teeth are made transparent and a dye is injected into canal systems, but these ex-vivo methods require the extraction of a tooth.4

Maxillary first molars with more than six canals are rare and few cases have been reported in endodontic literature (Table 1).5, 6

The Endodontic treatment of rare root canal morphology in a maxillary left first molar with three roots and seven root canals is discussed in the present case study. This unusual configuration has been confirmed by CBCT (cone beam computed tomography) imaging.

A 26-year-old man was referred by his general dentist to the Department of Endodontics, Kamineni Institute of Dental Sciences (Nalgonda, Telangana), with a chief complaint of spontaneous pain in his left posterior maxilla for three days. The patient's medical history was unremarkable and non – contributory. Clinical examination revealed extensive restoration of the left maxillary first molar, which was tender to percussion. The palpation of the buccal and palatal aspect of the tooth did not reveal any tenderness. The tooth was not mobile, and periodontal tooth probing was within physiological limits. Vitality testing of the affected tooth with Endo Ice (Coltene/Whaledent GmbH+ Co. KG, Langenau, Germany) caused an intense lingering pain. Preoperative intraoral periapical radiography revealed a restoration approaching the pulp space (Figure 1). Based on the clinical and radiographic evaluation, diagnosis of apical periodontitis was made and endodontic treatment was suggested to the patient. The patient's consent form has been obtained. The radiographic assessment of the affected tooth did not indicate any variation in the canal anatomy (Figure 2). Using 1.8 mL of 2 per cent lidocaine and 1:100,000 epinephrine, the tooth was anesthetized (DFL, Rio de Janeiro, Brazil). Rubber dam isolation was then carried out and the endodontic access cavity was built using high-speed diamond round and Endo-Z burs (Dentsply Maillefer, Konstanz, Germany). Clinical examination with the DG-16 endodontic explorer (Hu-Friedy, Chicago, IL) revealed 3 canal openings in mesiobuccal root, 2 in distobuccal root, and 2 in the palatal root (Figure 3b). Conventional triangular access has been modified to a trapezoidal shape, to improve access to the additional canals. The patency of the canal has been confirmed with ISO #10 K-files (Mani, Japan).

In order to confirm this unusual morphology, CBCT imaging of the tooth has been performed. A sterile cotton pellet in the pulp chamber and Cavit G (3M ESPE Dental Products, St Paul, MN) has been used to seal the access cavity. The patient obtained informed consent and a multislice CBCT scan of the maxilla was performed with tube voltage of 100 KV and a tube current of 8 mA (Eagle 3D CBCT unit, Dabi Atlante, São Paulo, Brazil). The involving tooth was orientated and the morphology was obtained in the transverse, axial, and sagittal parts of 0.5 mm thickness. Seven canals were identified by CBCT scan slices: three mesiobuccal canals (MB1, MB2, and MB3), two distobuccal canals (DB1 and DB2), and two palatal canals (MP and DP) in the left maxillary first molar canal (Figure 3a – d). CBCT axial images at the cervical level and mid root level showed that both the palatal and DB roots had two canals each, whereas the MB root showed three canals. However, CBCT axial images at apical level showed that the fusion of three canals into two canals in the MB root, the fusion of two canals into one canal in the DB root, while the palatal root still showed two canals.

Final canal rinsing was performed using 2% chlorhexidine digluconate (Asep RC, Stedman Anabond, Chennai, India) together with passive ultrasonic agitation. A saline wash has been done. With absorbent paper points (VDW) canals were dried and then sealed with a single-cone obturating technique using complementing gutta-percha cones (VDW) in each canal and AH Plus sealer (Dentsply Maillefer). A radiograph was used to determine the quality of the obturation (Figure 5 a – c).

Following the completion of root canal treatment, the tooth was restored with posterior composite (Matrix, Medicept Dental Products, UK) and the patient advised to have a full coverage porcelain crown. At the two-month follow-up, the patient was asymptomatic. 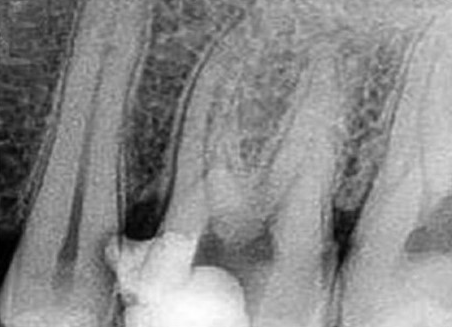 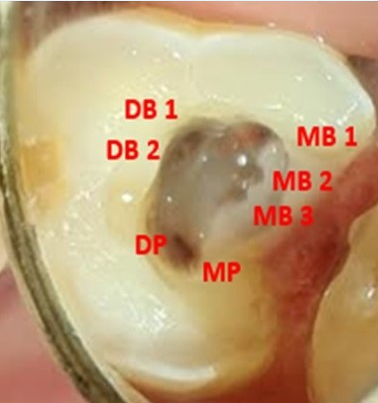 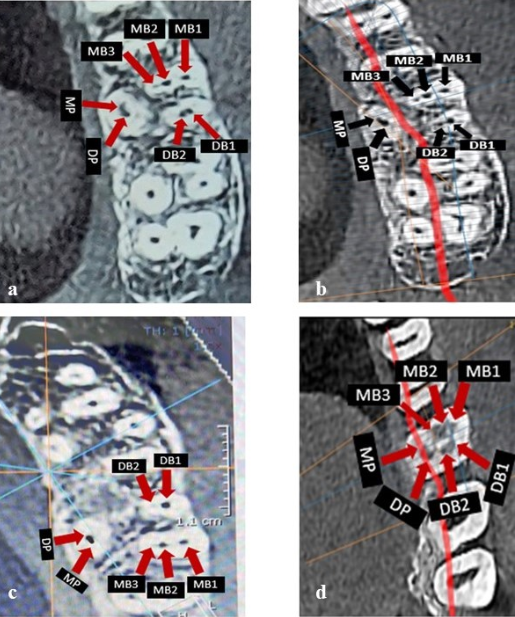 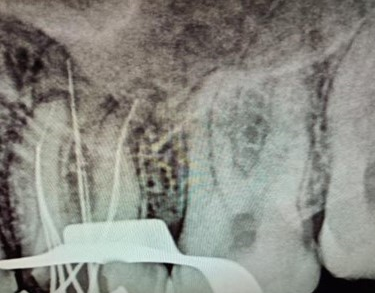 This case describes a maxillary left first molar with three mesiobuccal (MB1, MB2, and MB3), two distobuccal (DB1 and DB2), and two palatal (MP and DP) canals. Understanding canal morphology and its frequent variations is a prerequisite for endodontic therapy. These morphological variations in root canal morphology play an important role in root canal therapy outcomes. The major common causes of treatment failures, especially in permanent maxillary first molars were attributed to the inability to locate, clean and properly fill all canals of the root canal system. The design of root canal therapy is to thoroughly clean and shape all the pulp spaces that need to be filled with an inert filling material. Successful root canal treatment depends on diagnosis, treatment planning, good knowledge of the root canal anatomy, and its frequent variations.5

Vertucci recognized eight pulp space configurations in permanent teeth.7 In addition, 14 new additional canal types were identified by Sert and Bayirli, highlighting the complexity of the root canal systems.8 Diagnosis and management of these complexities presents a real endodontic challenge for clinicians prior to therapy, regardless of the teeth to be treated, and the inability to treat them. Careful evaluation of preoperative image tests may be helpful in these cases. Periapical radiography in different angulations is a crucial part of endodontic therapy for the identification of root and canal configurations. Besides, the amount of information obtained from periapical radiographs is limited by the fact that the two-dimensional image of a three-dimensional object is compressed, and this may be the reason why the radiographic examination of the tooth did not indicate an aberration in the canal anatomy.6

In this case, CBCT imaging was used to better understand the complex root canal morphology and helped to confirm the presence of multiple canals that could not otherwise be identified, except through a surgical operating microscope. 'As Low as Reasonably Achievable' (ALARA) was considered, but the benefit of using CBCT outweighed the risks of additional exposure. The CBCT scan established a diagnosis of three roots and seven canals in the left maxillary first molar, namely MB1, MB2, MB3, DB1, DB2, MP, and DP. The CBCT axial images showed that the mesiobuccal root had the type XV canal configuration of the Sert and Bayirli.8 The distobuccal root presented the canal pattern of the Vertucci type II. The palatal root exhibited the canal pattern of the Vertucci type IV.7 In the apical area, the MB2 and MB3 canals joined together to exit as one and the DB1 and DB2 canals joined to exit as one.

Various studies have shown the quality of CBCT imaging and its clinical application in the study of root canal morphology prior to clinical endodontic treatment. However, only in cases where complex anatomy and/or morphology is suspected should the use of CBCT imaging be recommended. Although limited, ionizing radiation is still used in CBCT imaging. Endodontic cases should therefore be determined on an individual basis and patients should always be subjected to the minimal amount of radiation possible to obtain the most useful information for proper diagnosis. In cases where unexpected complex anatomy is likely to occur after access or when canals are not identified, as suggested by Ball et al, intraoperative CBCT imaging is often an excellent choice.6

Single-cone obturation is considered to be a simple technique that improves practice and reduces stress for both clinicians and patients. The use of a single cone that matches the geometry of nickel-titanium instrumentation systems allows for a good adaptation of the gutta-percha to the canal walls and only little space remains between the gutta-percha and the canal wall, which is filled with the root canal sealer. Several previous studies comparing single-cone technique with other root canal filling techniques reported similar sealing ability and leakage in coronal and apical areas.9 We therefore decided to use this technique in the present case report.

To determine the apical sealing, condensation, and containment of the root canal filling material inside the root canal system, post-obturation radiographic assessment immediately after root canal obturation is required. For complex root canal configuration, several intraoral views at different horizontal angulations may be necessary so that all gutta-percha points are assessed in relation to the apex. It should be noted, however, that multiple intraoral radiographs with different angulations do not guarantee the identification of all relevant anatomy and may not reveal much more than one single exposure. An inadequate root canal treatment with insufficient condensation and adaptation can be deemed to be appropriate, on the angulation of the x-ray beam and the location of the tooth. The American Association of Endodontists (AAE) and the American Academy of Oral and Maxillofacial Radiology (AAOMR) Joint Position Statement had not advocated the use of CBCT for immediate postoperative imaging.10 For this reason, no CBCT post-obturation scan has been performed in this case. Indeed, the use of CBCT imaging in a limited field of view may reduce the potential exposure of the patient to radiation during endodontic treatment. This technology can provide images of multiple teeth in single exposure with approximately the same radiation dose as four to five periapical radiographs (100 mSv and 86-107.5 mSv, respectively) and can deliver dose savings over multiple traditional images in complex cases.

The root canal morphology is very complex and unpredictable. Clinicians should constantly look for differences in the canal configuration, as the good outcome of any case depends on the full debridement of all canals and disinfection. The present case report discusses the endodontic management of an unusual case of maxillary left first molar with three roots and seven canals and also highlights the role of CBCT scanning as an objective analytical tool for determining root canal morphology.