In the modern era, inclination towards a more conservative approach is being advocated and this has become possible through various innovative machinery and techniques. A conservative tooth preparation helps in retaining more of a tooth structure which would determine the prognosis of the treatment and the fate of the tooth in the long run. Even though we have a high focus on the conservative approach, we should keep in mind that there is always a chance of errors which is caused due to inadequate access to the canals. It is ultimately the clinicians call to decide between the benefit to the risk ratio and also its feasibility, all of which should result in good prognosis as well as a fruitful qualitative treatment outcome for the patient.

A conservative approach has always been the motive of the treating clinician. Gone are the times wherein there was extensive preparation of the tooth structure to accomplish the treatment. Lots of advanced protocol along with supportive machinery has been invented over the century and the progress shall not be halted. It is the duty of the clinicians to remain up to date and make use of such equipment to increase their efficacy as well as produce qualitative treatment.

In the modern era, inclination towards a more conservative approach is being advocated and this has become possible through various innovative machinery and techniques. The importance of preservation as well as a conservative treatment approach is highly appreciable however hindrances like reduced accessibility as well as reduced vision with many other reasons have been cited.

In RCT, access to the canals requires a more accessible coronal as well as cervical preparation for better instrumentation and delivery of irrigants.1 However, a compromised access would lead to difficulty in locating the canals as well as incomplete debridement, disinfection, and obturation may lead to root canal failure.2

A conservative tooth preparation helps in retaining more of a tooth structure which would determine the prognosis of the treatment and the fate of the tooth in the long run. Conservative approach with reduced removal of tooth structure helps to reduce the risk of tooth fracture as well as increased service life.

A study done to determine the impact of endodontic versus restorative procedures on tooth strength, have reported that endodontic access openings showed a 5% impact on tooth stiffness in comparison to any procedures involving removal of the tooth’s marginal ridges, which in turn reduces the cuspal stiffness by 63%. This provided us with a conclusion that marginal ridges are a key factor in retaining the tooth strength. The most commonly cited reason for brittleness of teeth is due to loss of moisture, and also inconsequential variance in the moisture among endodontically treated teeth and vital teeth.3, 4

It is recommended to prepare the tooth structure with preservation of the Peri Cervical Dentin, 3D ferrule and 3D Soffit, all of which helps to enhance the prognosis and increase the longevity of the tooth.5

During a normal access cavity preparation for RCT, a straight line approach is made for better access to the canals, efficacious biomechanical preparation and diminished procedural slips. However such preparation can take place only when there is a proper knowledge of the anatomy, accurate diagnostic pre-image, guiding templates and a sound expertise to make use of the same.

The use of newer surgical operative microscope and newer vision-based mental model is Look, Groom, and Follow, which are all round-ended tapered burs made to escalate the radius of the gouges as well as the nicks that can act as stress concentration points. The flatter flanks aids to generate a slicker and flatter walls. It also helps to curtail the gouges and dings which are unavoidable during cavity preparation even with utmost care.6

Herein, the traditional access cavity is modified into a more constrictive and definitive form to minimize the tooth damage and prolong the service life of the treated tooth. This technique was advocated by John Khademi and David Clark keeping in mind the longevity of the tooth by upholding the mechanical stability of the tooth. 6, 7 (Figure 1)

The approach for the cavity preparation begins at the central fossa and is comprehensively drawn out as to spot and access the canal orifices, all of which would help in the salvation of the pericervical dentin as well as the part of the floor of the chamber. (Figure 2) 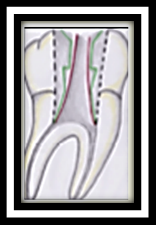 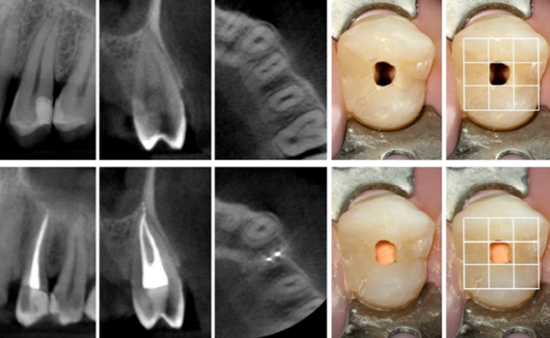 The outline of the cavity is based on its name a ‘Ninja’, wherein there is an oblique projection headed in direction of the central fossa of the root orifices in an occlusal plane. It runs in a line which is parallel in direction with enamel cut of 90⁰ or more in regard to the occlusal plane, providing better visualization of the root canal orifices when seen from capricious angulations. 6, 10, 8

This access cavity design is unique and requires a more diagnostic image as well as an experienced physician. This is said because here we will have multiple accesses into the coronal portion of the tooth which are in line with the root canal orifices. This helps to retain a significant amount of tooth structure which would help in preserving enamel as well as dentin, which is also called as a truss of dentin between the two prepared cavities that. 7 (Figure 3)

It aims at the removal of dentin just above the orifice, thereby maintaining the maximum amount of sound tooth structure.

The approach for multi-rooted tooth is different and is as follows:

Gouging is mostly seen when we use round burs with access from the cingulum. As the access grows internally, an inverse funnel is created.7 A continuous recurrent approach into the canal with the bur leads to the loss of peri-cervical dentin which reflects indirectly onto the tooth longevity.6

In this technique enamel is cut back at 45 degree in the shape of the Cala Lilly. 7 This altered preparation encompasses almost the complete occlusal surface during preparation. Even though this preparation may not be as favorable as the other preparations but still it is considered during preparations which have previous amalgam fillings and other large restorations. 6

These procedures unlike other normal procedure requires specialized equipment which would help the dentist as well as the guide the dentist to reduce any errors with a more favorable result with a better prognosis.

The objectives of this technique include

Introduced by Dr. Charles M and most commonly used to place dental implants. Patient CBCT volumetric data helps in determining the location of the access cavity. Further, overhead tracking cameras relate to the position of the patient’s jaw and the clinician’s bur in 3- dimensional space. At the same moment with the help of the software the clinician makes use of the software interface and with an active responsive feedback is about to get the precise location with a depth determination in respect to the planned access and the tooth

Special software which works in corrugation with CBCT and a surface scan provides us with a virtual outline of the access cavity.11

Another technologically added feature to such a procedure is the printing of a template accomplished by the use of a 3D printer. It helps to direct a minimally invasive drill into the calcified root canal which is useful in conserving the tooth structure and avoid/reduce the errors possible.

Guided access cavity aims at combining CBCT and 3-D printer technology, a bur is specially designed according to the design of the tooth as seen by the CBCT image. A virtual bur is first made and then superimposed on the tooth, and then the 3D printer is used to make the specific bur, which then helps in making the endodontic access.12 (Figure 4)

To provide the patient with the best possible treatment we should be well versed with the anatomy, the procedure, new addendums, latest machinery available, the costs involved, the feasibility, the experience and the required expertise. Even though we have a high focus on the conservative approach, we should keep in mind that there is always a chance of errors which is caused due to inadequate access to the canals. It is ultimately the clinicians call to decide between the benefit to the risk ratio and also its feasibility, all of which should result in good prognosis as well as a fruitful qualitative treatment outcome for the patient.

M Belograd The Genious 2 is coming2016