Biofilm formation is a method for bacteria to adapt for its survival, to put it another way, it act as a shield and prevents bacterial eradication. Microbial biofilms are one of the major reasons for progession of periradicular pathology. The article aims to concise and stratify the literature about, various factors that leads to biofilm formation their adaptation mechanisms, biofilms role in progression of peri-radicular infections, models developed to create biofilms, observation techniques of endodontic biofilms, and the effects of root canal irrigants and medicaments as well as lasers on endodontic biofilms.

Several studies have concluded that using antimicrobial agents to chemomechanically prepare the affected root canal, accompanied by obturation and coronal rehabilitation, results in a successful outcome.1, 2, 3 Root canal treatment may, however, fail due to a persistent or secondary periapical infection.4

Despite the fact that a variety of chemical and physical factors may cause periradicular inflammation, scientific evidence shows that microorganisms are required for the development and perpetuation of various types of apical periodontitis.5

Primary endodontic infections are polymicrobial in nature, with obligate anaerobic bacteria dominating the microbiota.6 These colonising microorganisms can be detected in the infiltrated root canal space as free-floating (planktonic) single cells that can be easily removed using different methods, or they can be attached to each other or to the root canal walls to form (sessile) biofilms, which are difficult to remove.6, 7

Thus, the objective of review is to discuss the mechanism of endodontic biofilm formation, factors influencing their formation, observation techniques to study the biofilms and various chemo-mechanical methods available to eradicate the biofilms.

Biofilm is a microbial growth mode in which complex communities of interacting sessile cells are irreversibly bound to a solid substrate as well as to each other and embedded in a self-made polysaccharide matrix (EPS).8, 9 A microbial biofilm is a population of microorganisms that meet the following four basic criteria: (i)the capacity to self-organize (autopoiesis), (ii) the strength to tolerate environmental disturbances (homeostasis), (iii) be more productive when functioning together than when functioning alone (synergy), and (iv) must respond to environmental changes as a team rather than as individuals (communality).10

Because of these intrinsic characteristics in a biofilm, bacteria in it have a unique strength to tolerate difficult growth and environmental conditions; (i) The biofilm structure protects the remaining bacteria from degradation; (ii) it enables for the trapping of nutrients and metabolic interaction between resident cells of the same species and/or different species; and (iii) show well-organized internal encapsulation, allowing bacteria with varying growth requirements to coexist in each compartment (iv) In a biofilm culture, bacterial cells can transmit and receive genetic materials in order to acquire new traits.11

The micro colonies or cell clusters produced by surface adherent bacterial cells are the basic structural unit of a biofilm.12 The micro colonies are enclosed by a glycocalyx matrix composed mainly of extracellular polymeric material that anchors the bacterial cell to the substrate.13 Biopolymers such as polysaccharides, proteins, nucleic acids, and salts make up a fresh biofilm matrix.14 The development conditions, nutritional availability, nature of fluid motions, physicochemical properties of the substrate, hydrodynamics, and other environmental factors are known to affect the structure and composition of a matured biofilm.15 A completely hydrated, viable biofilm typically appears as "tower" or "mushroom" shaped structures adhered to a substrate. (Figure 1)16

The stages include Stage 1: Formation of conditioning layer;

Dental plaque is the most well-known biofilm structure studied in dentistry.2, 4, 5 Planktonic bacteria in the saliva, like other biofilm systems, serve as the primary source of pathogens for plaque formation.18 In endodontics, biofilms can be divided into intracanal, external root (cementum), and periapical biofilms.18, 19 Endodontic bacterial biofilms can be categorized as:20

Microbial biofilms deposited on the root canal dentine of an endodontically infected tooth are known as intracanal microbial biofilms.20, 21 Intracanal biofilms exhibited a significant patterns in the organisation of microbes in the biofilm, as well as a characteristic bacteria–dentin wall relationship.22

Isolated microbial biofilms located in the periapical area of endodontically infected teeth are known as periapical microbial biofilms.26 Since most microbial species that invade the root canal are opportunistic pathogens that cannot withstand host defensive mechanisms in the periapical tissues, the microbiota in the majority of teeth infected with apical periodontitis is restricted to the root canal.27 The chronic periapical lesion may be perpetuated due to the low pathogenicity of these microorganisms and the resulting limited host response.28

The physicochemical properties of the components involved in the biofilm have an effect on the factors that influence biofilm formation.29 To begin, a conditioning layer is required.28 Second, numerous planktonic microorganisms will be placed on the surface of the conditioning film.29

Bacterial attachment to a firm substrate may be influenced by a number of factors (Figure 4),27, 28 is one of these variables.

Adaptation mechanisms of a biofilm

A large number of genes must be controlled in order for microorganisms to adapt to a biofilm habitat, and they are thus able to modify phenotypic properties for the specific environment.30 As a result, biofilm microorganisms vary from their planktonic counterparts phenotypically.31 Bacteria go through a series of complex physiological, metabolic, and phenotypic modifications to transition from planktonic to biofilm growth.31, 32 Physiological and protein regulation changes in biofilm-forming bacteria, especially those related to proteins involved in oxidative damage resistance, exopolysaccharide production, phospholipid synthesis, and membrane transport.33 This transition to a biofilm-specific phenotype can activate antimicrobial resistance, virulence, and persistence mechanisms.33, 34

Biofilm appears as "tower" or "mushroom" shaped structures adherent to a substrate. 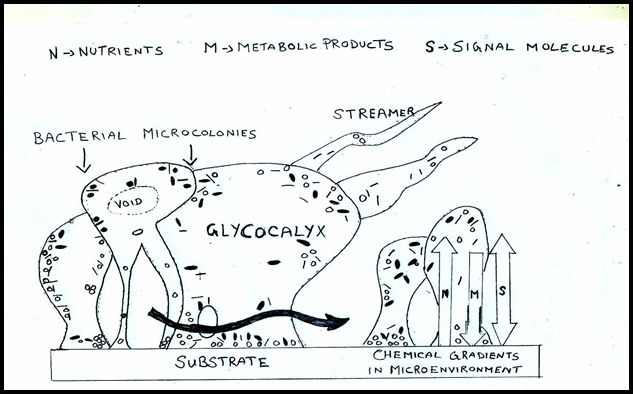 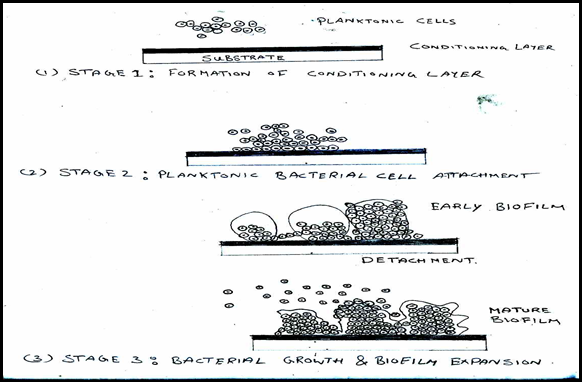 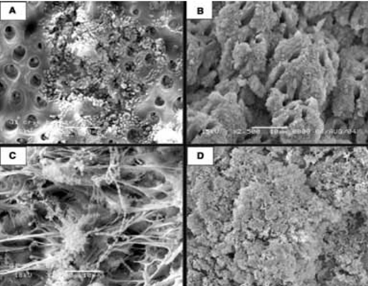 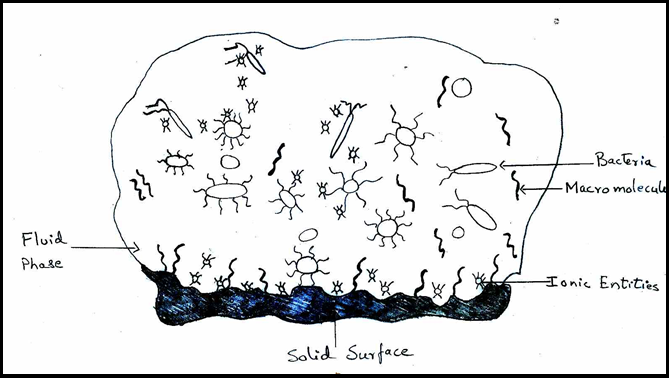 The MBECTM Assay. A) Biofilms form on the pegs of the MBECTM Biofilm Inoculator when planktonic bacteria adsorb to the surface. B) The peg lid has 96 identical pegs. 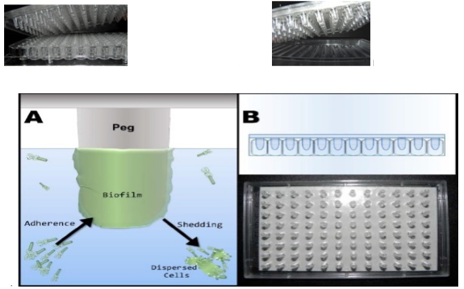 Biofilms can resist antimicrobial agents through a variety of mechanisms.35 The polysaccharide matrix of biofilms can impede antibiotic diffusion. Extracellular enzymes such as β lactamase may also become trapped and concentrated in the matrix, rendering β lactam antibiotics inactive.36

In vitro microbial biofilms can be developed using a variety of techniques.37 A nutrient storage, a single channel flow cell, a peristaltic valve, and a waste vessel make up the Flow Cell Framework.38 The flow cell is a Delrinpolyacetal resin channel with a rectangular glass cover slip and a Delrinpolyacetal resin flange sealed with a rubber gasket. There are eight circular recesses in the flow channel.39 These bacteria become attached and expand to form mature biofilms in the presence of shear (Figure 5). Biofilms are enveloped in a substance known as'slime,' which can often be seen through the naked eye. Dispersed cells are often released from biofilm surfaces, which are used as an inoculum for MIC assessments.

This lid is designed to fit into a regular 96-well microtiter plate or a trough bottom with inoculated growth medium channels. The entire system is placed in an incubator on a gyrorotary shaker or a rocking platform, which provides the shearing force needed to develop 96 biofilms on the peg lid.39, 40, 41

We may be able to distinguish particular species within a mixed biofilm population using fluorescent antisera and fluorescent in situ hybridization (FISH) probes.42

The TCP assay is the most commonly used and widely accepted procedure for observing and detecting biofilm formation. 43 Biofilm formation is observed using an ELISA reader to measure optical density.44

It is a qualitative test of biofilm development in which microorganisms are grown for 24 hours in trypticase soy broth with 1% glucose in tubes. 44 When a clear film lines the tube's wall and bottom, biofilm formation is considered positive.45

To improve progress, we need a better understanding of the characteristics and properties of bacteria and their biofilms, as well as environmental changes. Other benefits of the biofilm mode of bacterial growth include an increase in local nutrient concentrations, the ability to share genetic material, the ability to interact between bacterial populations of the same and/or different species, and the ability to generate growth factors across species boundaries. The formation of biofilms is clinically significant since interacting with species gathered in a biofilm is a challenging challenge for not only host defence mechanisms, but also therapeutic efforts such as chemical and mechanical antimicrobial treatment steps. Endodontic irrigants, intra canal medicaments, laser, photodynamic therapy, ozone, and plasma therapy have all been studied for their ability to remove endodontic biofilms. However, no technique has shown that the biofilm can be fully eradicated. To help predict the clinical effects of endodontic antimicrobials, models and studies are required to investigate the conditions that can impair their efficacy in vivo. The current understanding of biofilm infections leads to the realisation that successful control would necessitate a concerted effort to develop therapeutic agents that target biofilms and population signaling-based agents that prevent or facilitate biofilm detachment.

Metzger Z B Basrani Goodis He Instruments, materials, and devices. InCohen's Pathways of the PulpMosby201122382

L I Grossman Preparation of the root canal: Equipment and technique for cleaning, shaping, and irrigationEndod Pract1988179227