C-Shaped configuration of the canal in mandibular molars: A case report

The primary concern of this case report is to discuss and review the different etiological features of c shaped canals, with its incidence, along with anatomical features, diagnosis and management of the c shaped configuration of the canal in the molars of the mandibular arch. Literature revealed that c shaped canal configuration is slightly a different variation that has a predilection towards the racial and most of the times or most commonly is seen in mandibular molars that too most commonly in second molar of the mandibular arch. This morphology when present in the canal may posses difficulty in shaping of the canal, cleaning of the canal as well as debridement of the canal along with obturation of the canal. The one of the most common way in the management of this c shaped canal morphology is done by with the help of usage of rotary instruments and can also with the use of hand instruments that too assisted with sonics as well as ultrasonics.

A female patient of 39 years reported to the department of conservative and endodontics, Jaipur dental college, rajasthan and having a chief complaint of pain that is continuously present in the lower left posterior region of the mandible. After history was taken it was revealed that there was an intermittent pain which is present in the left mandibular first molar from the last 2 months, and this pain has showed increased intensity from the last three days. Patient also give history of subjective symptoms that includes sensitivity to any thermal stimuli along with increased intensity of the pain. Patient shows non contributory medical history.

The radiographs which were taken prior to the starting of the procedure showed that there was a radiolucency that was approaching to the pulpal space along with the periodontal ligament space has been widened adjacent to the apex of the root. From all the diagnostic tools that include sensibility tests, clinical examination as well as radiographical examination confirmed the case as of irreversible pulpitis that is symptomatic along with symptomatic apical periodontitis. In this case we approached the case with normal non surgical endodontic treatment plan. Whole of the treatment modality and treatment plan was thoroughly explained to the patient and a written consent was obtained from the patient. The procedure was started with the access opening was done under the application of the rubber dam which is followed by  working length determination using k 10 no k file , biomechanical preparation was done upto 20/6% rotary files followed by proper irrigation than obturation was done. Figure 1 working length determination, Figure 2 Master cone, Figure 3 Obturation of C shaped canal 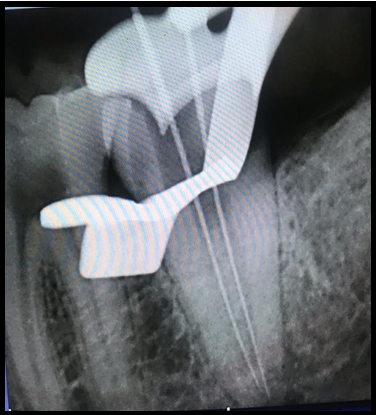 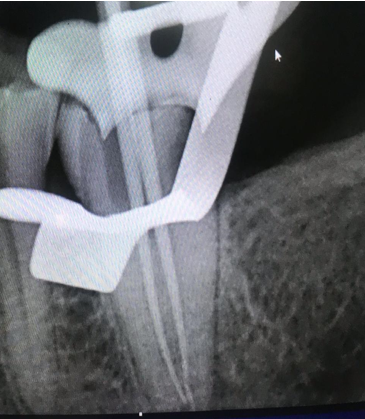 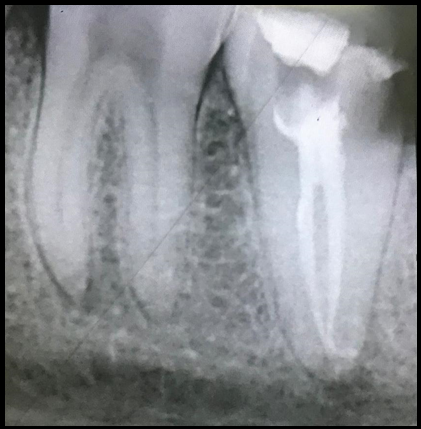 By the chronological age it was noted that the mandibular first molar do erupts in to the oral cavity by the age of 6 to 7 yearsand the apical closure of the root was completed by 8 to 9 years. The completion of the root canal differentiation commences by three to six years after the completion of the root.6 any sort of disturbance due to any reason like trauma will result in variation sin the anatomy of the root canal. Sabala et al7 revealed that when the aberration is rarer, there will be higher probability of it being bilateral. In this clinical case the mandibular posteror tooth of the contralateral arch is extracted and therefore the anatomical morphology could not be able to determine.

It was concluded that the c shaped configuration of the root canal is found to be havaing ethnic predilection along with a higher chances of prevalence rate in thesecond molar of the mandibular arch. So one should understand the anatomical morphology of the tooth along with its variations will surely helps out the dentist to manage these sort of cases successfully.