Ramachandra, Balaji, Magaravalli, Rangaswamy, and Govindappa: A Paradigm upswing towards the conservative rejuvention of an traumatized tooth: A Case report

A Paradigm upswing towards the conservative rejuvention of an traumatized tooth: A Case report

Traditionally, calcium hydroxide was the material of choice for apexification technique. However, the disadvantages of this technique includes delayed treatment, improper apical seal and increased risk of root fractures. Research for improved biocompatible materials resulted in evolving of higher characteristic materials such as Biodentine, a tricalcium silicate cement that possesses good handling and bioactive properties. This report describes the case of a 13-year-old boy who had traumatised his upper right central incisor which stunted the growth of root leaving it with open apex. The treatment of apexification with Biodentine and PRF as matrix was done. Prosthetic rehabilitation of endocrown fabricated with Lithium disilicate ceramic was delivered. Follow-ups were performed at 3rd, 6th and 12th month. The promising clinical and radiographic outcome in this case demonstrated that Biodentine may be an successful alternative to the conventional apexification materials and endocrown can be a conservative alternative to post and cores in such cases.

Among the defined treatment protocol, treatment of immature open apex tooth is endodontically challenging procedure, traditionally ‘apexification’ procedure were treated using calcium hydroxide.2 Calcium hydroxide paste was used for inducing an apical barrier.3 However, this has been material of choice since long time but it has certain limitations like increased risk of fracture in teeth treated with apexification.4 So in order to overcome this, new material Mineral Trioxide Aggregate (MTA) has been introduced. Though it showed better clinical acceptance, it has certain limitations like long setting time, technique sensitive, and tooth staining which led to a search for other materials.3 In the following case report, Biodentine was selected for apexification due to its outstanding physical properties like favourable setting time, low solubility, and excellent handling properties.5 Studies have concluded that biodentine showed better results compared with MTA, due to abundant apposition of hydroxyapatite when exposed to tissue fluids. With these superior biological properties, good color stability, low genotoxicity and cytotoxicity, makes biodentine a supreme material of choice in endodontics.6

A 13-year-old boy was referred to department of conservative dentistry and endodontics with complaining of broken and discolouration of upper front tooth region. Subjectively patient gave history of fall from bicycle 4 years ago. Clinical examination revealed an Ellis class 3 fracture with right maxillary central incisor. There was no associating pain or tenderness with the involved tooth. On soft tissue examination, probing depths was normal with no mobility to rule out any periodontal pathology. Sensibility tests (Thermal and electrical pulp testing) were carried out with respect to the tooth, which gave negative response. On radiographic examination, reveals a coronal fracture involving the distal pulp horn of right maxillary central incisor. Intraoral periapical radiograph shows the root end had thin radicular walls with apical flaring and periapical radiolucency of 3-4 mm with incomplete root formation. Adjacent tooth maxillary left central incisor had an intact periodontal ligament space and showed complete root formation. Provisional diagnosis was made as ‘chronic apical periodontitis’ with right maxillary central incisor. Based on the diameter of open apex and length of the root, treatment option of apexification was decided. Entire procedure was explained to the patient, patient’s parents and informed consent was taken.

Under the proper clinical measure endodontic treatment was carried out with the local anesthesia of 2% lidocaine with out vasoconstrictor (LOX 2%, NEON) was administered. Access cavity preparation was done under rubber dam isolation and working length was determined by the radiographic method. Instrumentation was limited to the coronal third of the canal to facilitate direct instrument access to the foramen. Canal disinfection was achieved with 2.5% NaOCl and 17% EDTA. Side vented needle was used 2 mm short of the canal terminus for delivering the irrigants. Passive Ultrasonic activation was done using ULTRA X device (Eighteenth). Canal was dried using paper points. Calcium hydroxide intra canal medicament was placed and tooth was temporized with zinc oxide eugenol. Patient was recalled after 1 week.

In the second visit, the disinfection of the canal was carried out under rubber dam isolation. Irrigation with 2.5% sodium hypochlorite solution was carried out with ultrasound activation. Canal was dried using paper points. Intracanal double antibiotic paste consisting of ciprofloxacin and metronidazole was placed and tooth was temporized. Patient was recalled after 1 week.

In the third visit, the temporary filling and cotton pellet were removed from the access cavity under rubber dam. Irrigation with 2.5% sodium hypochlorite solution was carried out with ultrasound activation and was used to remove the double antibiotic paste from the canal. Local anesthesia was accomplished with 2% lidocaine without vasoconstrictor (LOX 2%, NEON). A final irrigation was carried out with 17% EDTA for 1 minute. Paper points were used to dry the canal and small portions of PRF autogenous matrix were introduced at the apical 3rd of the canal and compacted beyond the apex by using hand pluggers. Biodentine was selected as material for apexification. According to manufacture instructions, biodentin was manipulated. Two increments of Biodentine was introduced into the canal with MTA carrier and delicately pushed towards the apex by using calamus pluggers. Few more increments were similarly introduced and compacted till the adequate thickness (> 4 mm) is created at the apex. Apical packing of the material to the root walls was verified in radiographs before complete setting of the material. Back filling of the canal was carried out with warm vertical compaction technique keeping gutta percha 2 – 3mm short from CEJ. Remaining canal orifice was restored with GIC. To overcome the discolouration of the tooth, Microabrasion technique was used. 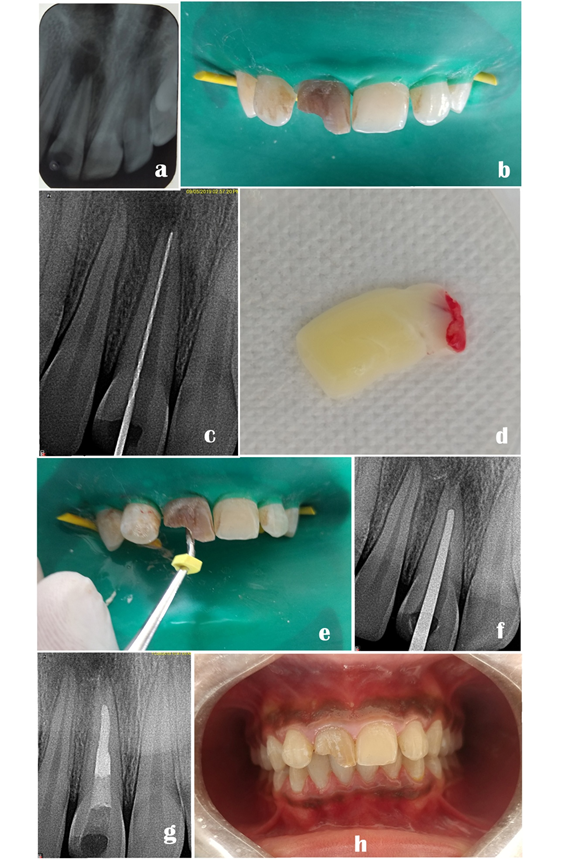 Final prosthetic rehabilitation of tooth was planned with endocrown restoration. Tooth preparation was initiated with flat end tapered diamond bur by providing equi gingival butt joint margin around the entire circumference of tooth. Occlusal reduction was done to achieve an inter incisal space of 1.5- 2 mm and depth of pulp cavity was kept 4-5 mm to aid as retention for prosthesis. Impression procedure was carried out in putty wash technique with addition silicone impression material. Endocrown was fabricated with Lithium disilicate (IPS E MAX CAD CAM). Prior to the cementation inner surface of the crown was etched with 5% HF and saline coupling agent was applied. Tooth was etched with 37% phosphoric acid and cementation was done with dual cure resin cement of transparent shade (IVOCLAR).The patient was recalled after 1st, 6th, 12th month for follow up. Subjective and objective examination revealed satisfactory response with adequate periapical healing. 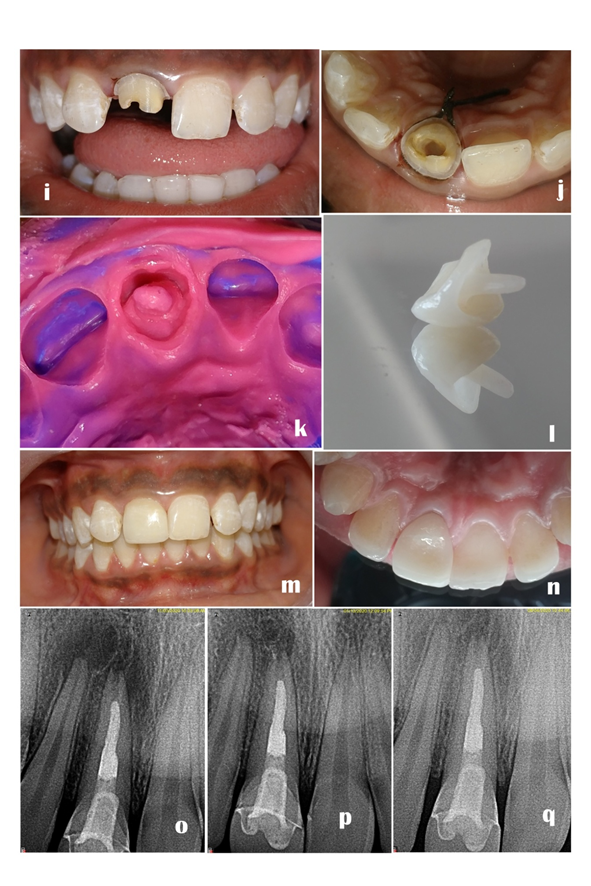 The major goal of any endodontic therapy is to preserve the normal form and function of the natural dentition. Regenerative procedures of an immature non vital permanent teeth is quite challenging clinically as it needs re-establishing the lost vitality and development of root maturation. In present day, endodontic approach for restoring an infected tooth with incomplete root end development involves either regeneration or apexification.7

Though regeneration approach has overcome the disadvantages of apexification protocol by strengthening roots and increasing root surface area, in the present case the treatment modality of apexification was chosen primarily instead of revascularization because the diameter of the radiographic apical foramen was less than 1.5 mm, which may be challenging to induce bleeding.8 Other criteria for selection of apexification is root length and width of remaining dentinal walls which were satisfactory in the present case.

In endodontic regeneration procedure calcium hydroxide and Triple antibiotic paste are the most commonly used intracanal medicaments. Triple antibiotic paste (TAP) is a mixture of ciprofloxacin, metronidazol and minocycline. Clinically usage of minocycline in TAP had shown tooth discoloration due to which, a double antibiotic paste devoid of minocycline (ciprofloxacin/metronidazole) was popularised. In endodontic regeneration, Double antibiotic paste has been successfully used due to its similar antimicrobial effects against endodontic pathogens.9 Calcium hydroxide material was used for apexification extensively in past century until when mineral trioxide aggregate (MTA) was introduced in 1993 which soon became the choice of material for apexification due to its high sealing potential and better biocompatibility. Extensive research showed MTA has capability to stimulate odontoblastic differentiation with high capacity, superior radiopacity, less tissue solubility, alkaline pH, good dimensional stability and antimicrobial activity.10 However, due to its long setting time, technique sensitive and discolouration property had led to development of other substitute materials.11, 12

Biodentine is an alternative biocompatible inorganic non-metallic compound which has clinically wide range of applications in endodontics.13 In the present case Biodentine was chosen over MTA as it bonds chemo-mechanically with tooth with high compressive and flexural strength than MTA. Calcium chloride, a constituent in the liquid composition of Biodentine is responsible for acceleration of the setting reaction. Biodentine sets in 12-15 minutes which is very low when compared to MTA which needs 2 – 3 days for final setting.14, 15

Various materials can be used for the formation of calcific barrier during apexification have been reported in the literature. In this case PRF has been used as an apical matrix membrane was performed as it is a matrix of autologous fibrin, which gets embedded by a large quantity of platelet and leukocyte cytokines during centrifugation. The PRF membrane that is applied in such cases helps in rapid angiogenesis. Most importantly, PRF being a biocompatible material, can be used as matrix for apexification procedures with cases of wide-open apices.16

For discolouration of the tooth, In this present case micro abrasion was chosen instead of bleaching as the patients age was 13. Enamel microabrasion technique is an alternative method to bleaching in removal of intrinsic enamel stains, and also to minimize surface irregularities on enamel. According to Balan et al micro abrasion technique must be considered in removal of intrinsic stains to a certain extent before any restorative procedure, regardless of their dimensions and depths.17

Despite the large number of in-vitro and in-vivo investigations, there is still an enigma regarding the ideal treatment for the restoration of the endodontically treated tooth.18 Rehabilitation of badly mutilated tooth treated with apexification or regenerative procedures is clinically more challenging than restoring a normal endodontically treated tooth. The choice of acquiring retention from the root canal is no longer available due to presence of apical or cervical biocompatible barrier.

Traditional post and core restoration system was not an ideal restoration choice for open apex teeth, as insertion of post in an apexification treated tooth would compromise the apical seal and also would weaken the root structure. Instead, conservative endocrown prosthesis is considered an alternative restoration for the tooth. The intaglio surface of the endocrown, occupying the inside of the pulp chamber, is responsible for the macromechanical retention. 19, 20 Endocrown is a monoblock restoration achieved by combining the intraradicular post, the core, and the crown in one component can reduce number of adhesive interfaces that are prone for debonding.21 According to Biacchi et al, lithium disilicate ceramics have shown greater resistance to compression forces in endocrown restorations, compared with traditional crowns supported on fiber posts. CAD-CAM ceramics such as, lithium disilicate reinforced ceramics, appear to be the best option for anterior tooth endocrown restorations. The lithium disilicate reinforced ceramics have good mechanical strength and esthetically, they appear alike to that of tooth enamel. 22

The combination of PRF as a scaffold and Biodentine™ as a calcific apical barrier used in the present case can be a viable alternative, which may prove as an effective course of action for creating artificial root‑end barriers.

Prosthetic rehabilitation of such immature anterior teeth are very challenging. The development of adhesion in dentistry and greater strength ceramics facilitates fabrication of endocrowns, which can be an good alternative to standard tooth rehabilitation using post and cores. However, fabrication of such endocrown restorations in the anterior teeth can be considered as conservative approach to establish function and esthetics.