Introduction: This study aimed to assess the periapical status and the quality of root canal filling of endodontically treated teeth from cone-beam volume tomography (CBCT) images.

Materials and Methods: Of 66 teeth (124 root canals) that received root canal treatment, the quality of the root canal filling as well as the periapical status were assessed using cone-beam volume tomography (CBCT). Radicular obturation on an X-ray image was defined as satisfactory if it is 0-2 mm from the radiographic apex without voids. On CBCT scans, the apical end of the canal has replaced the radiographic apex.

Results: The present study showed, according to the periapical status, 87.9% (n = 109) of the canals exhibited a periapical lesion. The 1, 2, and D scores of the CBCT PAI were more met with respectively 46, 19.4%, and 8.9%. The association between the lengh of root canal filling and the presence of apical radiolucency showed a significant relationship (p = 0.02). The presence of apical radiolucency is also very significantly associated with the inadequate density of root canal fillings (p = 00003).

Conclusion: The present study confirms, by CBCT, that the presence of periapical lesions was associated with poor quality obturation technique.

Periapical status is an essential diagnostic and evaluation criterion for endodontic pathologies to characterize the results of endodontic treatment. Intraoral radiography has been widely used to assess the results of endodontic treatment.1, 2, 3 However, it gives a two-dimensional image of a three-dimensional structure and therefore bone lesions are often not detected optimally by the barrier effect played by the cortex.4, 5 The CBCT gives multi-plane images at submillimeter resolution with a lower radiation dose compared to a medical scanner. Consequently, CBCT has replaced conventional tomography in several diagnostic tasks in dentistry and maxillofacial surgery.6 Paul Sylva reported in 2009 that the detection sensitivity of apical periodontitis was 0.77 for conventional radiography and 0.91 for CBCT and this high sensitivity will help us study these periapical lesions.7

This is a descriptive cross-sectional study of radiological examinations with Cone Beam CT of a Senegalese population. The study mainly concerned teeth that had undergone root canal treatment, in patients over 16 years of age, referred for a cone-beam examination to the dento-maxillofacial radiology department of Odontology and Stomatology Institute of the Cheikh Anta Diop University in Dakar.

Cone beams were performed with a dental CBCT device from Carestream 9300 (Atlanta, Georgia). The field of acquisition (FOV) for imaging the dentoalveolar systems was cylindrical with a size = 5cm × 5cm. The size of the voxels was between 180 and 250 μm. Only good quality images without metallic and movement artifacts, with good spatial resolution, were retained for this study. These images were read with the software of the manufacturer Carestream CS 3D Imaging, they were first visualized on Multiplanar reconstructions (MPR) on the different anatomical planes (axial, sagittal, and coronal) and in curvilinear reconstruction. The sections were spaced 200 µm thick. (Figure 1).

Interface of a CBCT exam on carestream's CS 3D imaging in MPR mode. 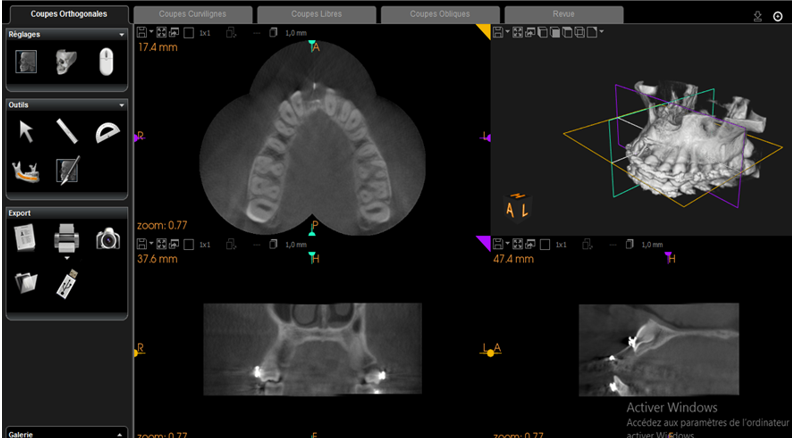 Two experienced raters were previously calibrated on the CS 3D Imaging visualized and interpreted the CBCT images by evaluating 10 CBCT that were not included in this study. The Kappa values ranged from 0.75 to 0.80. They evaluated the radiographs on two separate occasions and classified the periapical lesions by CBCT PAI. Moreover, in discordant cases, scores obtained by consensus were included in the final analysis.

Sociodemographic variables such as age and sex were collected. The number of roots, the number of canals as well as the quality of the root canal fillings were analyzed on axial, sagittal, and coronal slices (Figure 2). 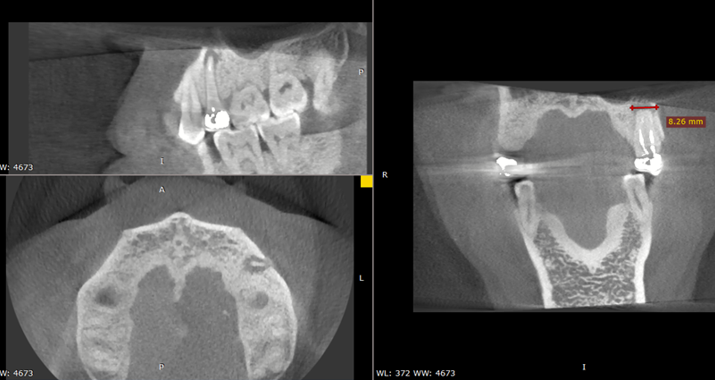 The length was measured in millimeters according to the distance between the limit of the obturation and the radiographic apex. She was considered:

The root canal filling density was evaluated according to the hypodensity between the dental walls and the filling judged:

The periapical status was assessed by the cone-beam computerize tomography periapical index (CBCT PAI) of Estrella.10 which is based on a six-degree scale, correlated with the diameter of the radiolucency, and possibly supplemented by a variable evaluating the impairment cortical.

Evaluation of the periapical status according CBCT PAI

Evaluation of the technical quality of root canal filling according to length and density showed that 70.8% (n=68) of root canals were underfilled, and 83.3% (n=80) were with a void in the filling (Table 2).

Technical quality of root canal filling according to length and density

This is a cross-sectional study based on radiological data from patient records. The main limitation of this study is that it is impossible to determine whether a periapical lesion is a sign of persistent apical periodontitis or an incompletely healed lesion after root canal treatment.

Another limitation of the study is that a radiological image provides limited information. For example, there is no information about preoperative situations, time of treatment or restoration, the time elapsed since the patient's initial endodontic treatment, and the level of expertise of the practitioner. Ørstavik et al.11 developed a periapical status assessment index called PAI, using a scale of 1 to 5 based on the radiographic image, and its reliability was proven in 1988. The Ørstavik Periapical Index is widely used to detect the presence of apical periodontitis.12, 13 However, this basis for assessing the periapical status on a retro alveolar film has some disadvantages such as image distortion, image superimposition, and the images are two dimensional. The radiograph has poor image quality, especially in the upper and lower anterior regions. Given these problems, the accuracy of two-dimensional radiographs in detecting apical periodontitis has been questioned.

The present study used 3D CBCT imaging which presents more precise anatomical data. A periapical index based on cone-beam computed tomography (CBCT)10 was used as a basis for evaluation. CBCT has several advantages: CBCT images do not overlay anatomical structures and are more useful in identifying lesions in cancellous bone and allow accurate diagnosis of the apical extent and density, quality of root canal fillings, and the condition of the periapical tissues.8 The present study showed, according to the periapical status, 87.9% (n = 109) of the root canals presented with apical radiolucency. The 1, 2, and D scores were more encountered with 46, 8%, 19.4%, and 8.9% respectively. The association between the limit of root canal obturation and the presence of apical lesion shows a significant relationship (p = 0.02). The presence of apical radiolucency is also very significantly associated with the inadequate density of root canal fillings (p = 00003).

These results confirm those of other studies which have shown that teeth with inadequate root canal sealing have a higher prevalence of periapical pathologies.12, 13, 14, 15 Indeed, Gündüz et al. showed a prevalence of apical periodontitis of 67.9% of teeth treated endodontically.12 Moreover, Gumru et al. found a prevalence of 42% of apical periodontitis in treated teeth.15 The prevalence of periapical lesions according to the length and the filling density was 27.1% (n = 26) when the length of the fillings was adequate, and 16.7% (n = 16) when the density was homogeneous. However, it was 70.8% (n = 68) in the case of underfiling, and 83.3% (n = 80) in the presence of vacuum in the obturation. These results are in line with the data in the literature. Van der Veken et al. had shown, in a Belgian subpopulation, a prevalence of periapical lesions of 22.8% when the root obturation was adequate, when it was considered inadequate, the prevalence rose to 41%.9

Also, Bürklein et al. showed that in 49% of filled teeth with apical pathology, a reason for treatment failure was apparent. Under-fillings were the most frequent (31.2%), followed by sealer extrusions (8.1%), of inadequate density (5.6%), unfilled root canals (5.3%) and over-fillings (1.0%).16 These high rates can be explained by the accuracy of CBCT compared to conventional radiography. Indeed, the study of Song et al whose objective was to compare the in vivo performances of CBCT and conventional radiography in the evaluation of the apical limit of the obturation of the root canal and the detection of voids showed that CBCT was better than conventional radiography in assessing the apical limit of fillings. However, CBCT, with its low sensitivity and specificity, could both overestimate and underestimate the proportion of voids in root canal fillings.17 Thus, CBCT was not suitable for evaluating the quality of root canal fillings. However, assessment of periapical status and follow-up of cases of apical periodontitis should be performed using CBCT, as it is a method capable of analyzing lesion volume with accuracy and precision.18

The present study showed that the assessment, with CBCT, of the periapical status and technical quality of root canal fillings performed by dental practitioners in a Senegalese subpopulation was associated with a high prevalence of periapical lesions. The present study confirms previous findings that technically adequate endodontic treatments exhibit a better periapical condition than those with under-filling or over-extension. It would thus be necessary to improve the teaching of endodontics in initial training and in continuing training of practitioners to improve the clinical skills of dental practitioners in endodontics.