A comprehensive knowledge of the root canal anatomy is essential for successful endodontic treatment. However, presence of anatomic variation in the tooth can be diagnostically and technically challenging and hence may pose difficulties during endodontic therapy. The anatomical variations associated with permanent mandibular canines have been reported by several investigators. Mandibular canines are recognized as usually having one root with one root canal in majority of cases. The occurrence of two root canals in single-rooted mandibular canine is considered unusual in Indian population. This case report describes non-surgical endodontic management of right permanent mandibular canine having one root with two canals and one apical foramen (Vertucci Type II).

The success of root canal treatment depends on eradication of endodontic pathology through a thorough chemo-mechanical preparation of the canal system followed by tri-dimensional root canal filling with a hermetic seal.1 Therefore, the clinicians should have an integral knowledge of the root canal anatomy as well as its variations. One of the most common reasons for failure of endodontic treatment is a missed canal due to lack of knowledge on anatomical variations.2 The anatomical variations associated with permanent mandibular canines have been reported by several investigators with the introduction of new technologies related to intraoperative vision magnification and innovative radiological imaging systems.3

A 45 years old female patient presented with a chief complaint of pain in the right lower front tooth since 2 days. The pain was sudden in onset, severe in intensity and intermittent in nature.

The pain disturbed her sleep and lingered for several minutes even after removal of a thermal stimulus. Clinical examination revealed a deep carious lesion on the distal aspect of the crown irt 43. Electric pulp test evoked an exaggerated response irt 43. Intraoral periapical radiographic examination [Figure 1] revealed an ill-defined distal radiolucency approaching the pulp space coronally with no significant changes noted periapically. Careful evaluation of the diagnostic radiograph revealed presence of two root canals starting as two canals from the pulp chamber and joining at the apical third of the root to form one and extend till the apex exiting through one apical foramen (Vertucci Type II). Based on the clinical and radiographic findings, the tooth was diagnosed with acute irreversible pulpitis. A single-visit endodontic management for the tooth was planned.

In the first visit, local anaesthesia was administered using 2% lidocaine (LOX 2%, Neon Laboratories Ltd. Mumbai, India) for inferior alveolar nerve block and the tooth was isolated under rubber dam. Access preparation [Figure 2] was done with an endo access bur no.1 (Dentsply, Maillefer, Ballaigues, Switzerland) and the two orifices were located: one buccal and one on lingual aspect [Figure 2]. The canals were then negotiated with K-file ISO 10 (Mani, Japan) to create initial glide path and length determination was done with an electronic apex locator (Canal Pro, Coltene Whaledent) and confirmed radiographically [Figure 3(a)] Coronal enlargement of the canals were performed with the nickel-titanium ProTaper orifice shaper (Dentsply, Maillefer). Root canal instrumentation was performed with ProTaper Gold Ni-Ti rotary files (Dentsply, Maillefer) in a crown-down technique upto F2 size for both the canals, using Glyde (10% carbamide peroxide & 15% EDTA, Dentsply, Maillefer) as lubricant. After each instrumentation, the root canals were irrigated with 2.5% sodium hypochlorite solution. A master cone radiograph [Figure 3(b)] was taken, followed by drying of the canals using paper points and obturation with corresponding ProTaper gutta-percha points (Dentsply, Maillefer) using AH plus resin sealer (Dentsply, Maillefer). A postoperative intraoral periapical radiograph [Figure 3(c)] was taken and subsequently the access cavity was sealed with permanent coronal composite resin restoration. 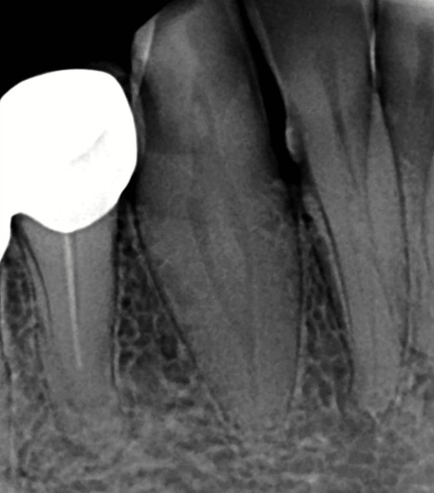 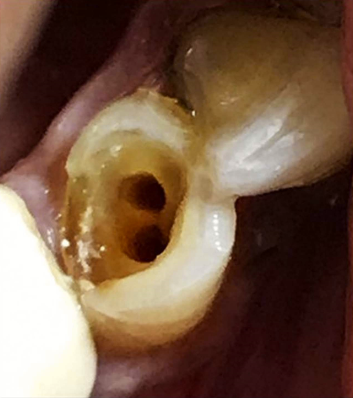 The mandibular canine is a strategically important tooth in the dental arch. The root being long and stable, it is useful for prosthetic support and because of its proprioceptive properties, regulate or guide masticatory function, combined with its role in occlusal guidance during the eccentric movements and posterior disocclusion.6 Therefore, considerable effort should be directed to its preservation, inspite of occasional diverse morphologic challenges.

Mandibular canines are usually recognized as monoradicular tooth with one root canal which exits as a single foramen at the apex.4 However, several researchers have reported anatomical variations associated with mandibular canines. Occurrence of mandibular canines with one root and two root canals has been reported to be about 0%–24% in various ethnic groups and that with two roots having two or more canals is rare ranging from 0% to 5%.5, 6, 7 Furthermore, literature search reveals that the variation has a strong preference for the female sex (87.5%), mainly in patients with an average age of 38.1-years (range 17–60 years).3

Early detection of a mandibular canine with anatomical aberration favourably influences the success rate of endodontic treatment. Therefore, it is crucial to carefully inspect the diagnostic radiographs taken in different horizontal angulations or if intraoral periapical radiographs won’t suffice, a CBCT may be advised to accurately determine the number of roots, curvatures, and bifurcations in both sagittal and axial planes.8, 9

Successful and predictable endodontic treatment of such anatomic variation also requires proper instruments and the knowledge to use these instruments effectively. Wider access preparation, adequate illumination, efficient explorers, flexible nickel titanium files and whenever possible, intraoperative magnification may be helpful in managing such cases with lesser risk of iatrogenic mishaps.

Although the incidence of anatomical variation in mandibular canine is low, it can exist. Henceforth, dental anatomical knowledge is an essential requirement in the practice of endodontics. A thorough knowledge of the tooth and root canal morphology, clinical exploration and detailed radiographic interpretation may be helpful in detecting such root canal aberrations and to achieve success in their management.