Tayal, Ghosh, Adhikari, and Ghosh: Management of an endo-perio lesion: A multidisciplinary approach

Management of an endo-perio lesion: A multidisciplinary approach

Head of the Department

The presence of pulpal pathosis and inflammatory periodontal disease concomitantly can complicate diagnosis and treatment planning of any tooth. It requires a combined treatment approach involving endodontic, periodontic and prosthodontic intervention. Often, the periodontal and prosthodontic aspects are neglected by the clinicians after successful endodontic treatment resulting in failure. The present case report describes a multidisciplinary approach for the treatment of a tooth that presented with an endo-perio lesion; using non-surgical root canal treatment and periodontal regenerative surgery (non-incised papillae surgical approach, {NIPSA} along with GTR membrane and an alloplastic bone graft) which were then followed by the placement of a conservative tooth coverage restoration (endocrown). A significant gain in clinical attachment level was seen 6 months postoperatively. Radiographically also a significant amount of bone fill was observed.

The tooth, the pulp tissue within it and its supporting structures should be viewed as a single unit. Although they have been primarily studied as separate entities, these structures are interrelated and influence each other during health, function and disease. Hence, endodontic and periodontal diseases can sometimes be difficult to differentiate as they may mimic each other clinically; but making a correct diagnosis is of vital importance to formulate an appropriate treatment plan.

Failing to address all aspects of treatment can hamper long term prognosis and result in clinical failures. Hence, it is imperative to treat these lesions as a combination of multiple aetiologies and not as a single entity. A thorough history, careful clinical examination, radiographic and other investigations, and interdisciplinary treatment are required to produce optimal results. Endo-perio lesions have been classified in several manners. The most commonly used classification was given by Simon et al.1 in 1972, who classified such lesions as primary endodontic lesions, primary periodontal lesions, primary endodontic lesions with secondary periodontal involvement, primary periodontal lesion with secondary endodontic involvement and true combined lesion.

Healing of primary endodontic lesions usually take place after proper root canal therapy while primary periodontal lesions can solely be treated by periodontal therapy. However, a combined therapy is required for other type of lesions. Also, an often overlooked, yet intangible aspect is the prosthetic rehabilitation of such teeth, which have been weakened by the disease process and the subsequent treatment procedures. Hence, it is imperative that all aspects are taken into consideration to formulate a complete and successful treatment plan.

A 35-year-old female patient reported to the Dept. of Conservative Dentistry and Endodontics with the chief complaint of food lodgement and constant pain in her lower right back tooth region since 3 months, and a swelling near the same region since 3 days. The pain increased on chewing. Intra-oral clinical examination revealed deep carious lesion on the occlusal aspect of 47 and a tender swelling in the buccal vestibule w.r.t same tooth (Figure 1A). The tooth was tender on percussion. There was gingival bleeding on probing. No response was observed with cold and electric pulp sensibility tests. Intraoral periapical radiograph (IOPAR) of 47 revealed radiolucency in the occlusal surface which extended into the pulp chamber. Radiolucency involving both distal and mesial root apices and furcation area was also observed. (Figure 1B)

A:- Occlusal caries and a swelling in the buccal aspect of 47, B:- IOPAR confirms pulpal and periodontal involvement, C:- initial probing depth measured via UNC-15 probe (midbuccal-12mm)

At the first visit, endodontic treatment w.r.t 47 was initiated after adequate anaesthesia (2%lignocaine with 1:100000 Adr). Upon gaining access to the pulp chamber, 3 canals (ML, MB and distal) were located, negotiated and working length was determined. A dental operating microscope was used to examine the pulpal floor lest any canals were missed. The canals were adequately prepared using HyFlex®CM™ System (Coltène Whaledent, Switzerland). Active irrigation was done with 5.25% sodium hypolchlorite using Ultra X (Eighteenth, Orikam) agitation device. Calcium hydroxide dressing (Ultracal XS, Ultradent Products, Inc., South Jordan, UT, USA) was placed with the help of navy tips (Ultradent Products, Inc., South Jordan, UT, USA) as an intracanal medicament (Figure 2A) and oral hygiene instructions were given to the patient. The patient was recalled after 1 week. By then, the swelling had subsided (Figure 2B) and the patient was sent for oral prophylaxis.

A:-Calcium hydroxide placed in canals, B: the swelling subsided completely 1 week after the initial endodontic procedures.

Patient was re-evaluated and oral prophylaxis was done with the help of ultrasonic supragingival scaler and subgingival curettes. Patient was recalled after 1 week. 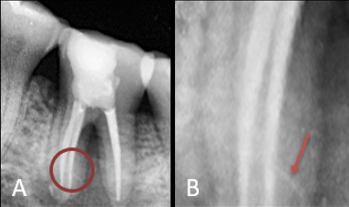 The tooth was then obturated with the help of GP and a calcium hydroxide-based sealer (Sealapex, Sybron-Kerr, Romulus, MI, USA) and core build up was done (Figure 3A). regenerative periodontal surgery was then planned after completion of endodontic treatment. The patient was then sent for concerned haematological investigations for surgery.

A Non-Incised Papillae Surgical approach (NIPSA) was used. After adequate anaesthesia, (2%lignocaine with 1:100000 Adr) an oblique horizontal incision was given with a no 15 BP blade. A full thickness mucoperiosteal flap was elevated and all granulation tissue and necrotic cementum were curetted out (Figure 4A). An osteoconductive β-tricalcium phosphate (β-TCP) bone graft (SYBOGRAF-Plus, Eucare Pharmaceuticals, India) was applied (Figure 4B) and a Guided Tissue Regeneration (GTR) membrane (PerioCol-GTR, Eucare Pharmaceuticals,India) placed (Figure 4C). Primary closure was done with absorbable 4-0 vicryl suture (Figure 4D) and a periodontal dressing (Coe pack) was placed to cover the surgical area (Figure 4E). Post-surgical instructions were given to the patient along with appropriate analgesics and antibiotics. After 7 days the periodontal dressing was removed. Suture removal was done after 10 days.

For prosthetic rehabilitation of 47, a conservative prosthesis, endocrown was planned and prepared accordingly (Figure 5A). Endocrown was cemented, with the help of a 10-MDP based resin cement, (Multilink, Ivoclar-Vivadent, Lichenstein) (Figure 5C).

A:- Tooth preparation for endocrown, B:-10-MDP based tetric N-bond universal applied on the intaglio surface of the zirconia prosthesis, C:- Endocrown cemented

A:- IOPAR at 6 month follow up time period, B:- reduced probing depth (midbuccal-1mm)

A guarded prognosis is generally expected in cases with long standing chronic and extensive periodontal diseases. In severe destruction, invasive procedures like hemi-section or root resection may be employed to salvage some part of tooth structure. In the present case report, the presence of a deep carious lesion and negative pulp sensibility test results were a pivoting finding and suggested the primary endodontic involvement. Clinical attachment loss in the form of presence of infrabony pockets on the buccal aspect confirmed a secondary periodontal involvement as well. After the initial biomechanical procedures, calcium hydroxide was used as an intracanal medicament. Calcium hydroxide is bactericidal, anti-inflammatory and proteolytic; thus, it inhibits resorption and favours repair.3 It is especially effective in endodontic lesions with extensive periapical pathology and pseudo pockets, and also inhibits periodontal contamination of the instrumented canals via patent channels of communication by its temporary obturating action.4 Ultracal XS was used since it has a high immediate pH and maintains its alkalinity for a long term,5 thus making it suitable for disinfection. Irrigation was performed using 5.25% sodium hypochlorite (bactericidal, dissolves pulp tissue) 17% EDTA (removes smear layer) and 2% chlorhexidine (antibacterial effect). Ultra X, an ultrasonic device, was used for agitating sodium hypochlorite and EDTA solutions which increased their efficacy.6 The efficacious irrigation allowed sealer penetration in the lateral canals as well.

For periodontal surgery, NIPSA was chosen for this particular case. According to Rodriguez et al. 2017,7 this approach results in significant improvements in pocket depth, reversal of clinical attachment loss, and also preserves more soft tissue when compared to conventional technique. Guided tissue regeneration techniques, can increase the bone support of the affected tooth and may help improve prognosis in lesions involving both periodontal and endodontic components. These regenerative procedures have reported to have a success rate 77.5% in the treatment of combined lesions.8 On the contrary, the success rate ranges from 27% to 37% without regenerative procedures. In the present case report, Guided Tissue Regeneration was performed using a GTR membrane β-TCP bone graft. β-TCP is a biocompatible and osteoconductive material was used since it acts as a scaffold on which osteoblasts act, to form bone and preserves the space for regeneration.9 After the completion of the periodontal therapy, a zirconia endocrown was placed. While restoration of endodontically treated teeth is a matter of great controversy, it is generally agreed that aggressive tooth preparation should not be done at the cost of already compromised natural tooth structure. Endocrown has been described as a monolithic ceramic bonded prosthesis having a supragingival butt joint, that preserves maximum enamel, thus improving adhesion.10 These supragingival margins are also more periodontium friendly than a conventional crown. The endocrown does not extend into the root canals and is confined to the pulp chamber, thus also preserving radicular structure. The preparation employed in the present case had the advantage of both macro-retention by its structural extension which anchors it in the pulp chamber, and of chemical bonding of the zirconia structure via adhesive bonding through 10-MDP based luting agents.11

Endo-perio lesions have a complex pathogenesis and require meticulous skills to identify and treat them. Cooperation between different disciplines including periodontology, endodontic and prosthodontics is imperative to effectively tackle these lesions. A wholesome approach, proper patient education and motivation, along with a meticulous treatment plan can lead to better resolution of these lesions as evidenced by this case report.