For the success of endodontic treatment outcome, diagnosis plays a very important role. Endodontic diagnosis is similar to a jigsaw puzzle which cannot be made from a single isolated piece of information. Radiography plays a vital role in diagnosing dental diseases. Overcoming the major disadvantage of two dimensional imaging of superimposing the dento-alveolar structures, 3 dimensional images by Cone Beam Computed Tomography is of great help. It is very common that when radiographs show a superimposition of the incisive foramen over the apex of maxillary central incisors, mimicking apical periodontitis, unnecessary endodontic treatment or retreatment may be prescribed. Diseases of non endodontic origin that affect the tooth apex, such as Nasopalatine duct cyst, should be included in the differential diagnosis. In the present case report the role of CBCT in diagnosis is being discussed.

Endodontic diagnosis is similar to a jigsaw puzzle which cannot be made from a single isolated piece of information. For the accurate diagnostic assessment, treatment planning and follow-up of patients suspected of having dental and maxillofacial disease, radiology is an essential aspect.1 Until few years ago, periapical radiographs were the main radiographic investigation used in the endodontic treatment.2 However, conventional radiography represents two-dimensional (2D) image of three dimensional (3D) objects with significant structure superimposition and unpredictable magnification. The advent of digital radiographic imaging introduced relevant improvements in endodontic diagnosis.3 The first Cone Beam Computed Tomography (CBCT) scanner was developed in 1997, represents new development in dento-maxillofacial radiology and precipitated a shift from 2 dimensional to 3 dimensional data acquisition, image reconstruction and visualization.4 Some of the non endodontic pathologies are misdiagnosed as endodontic lesions. The nasopalatine duct cyst (NPDC) can often be misdiagnosed as being endodontic in nature. It is one of the most common nonodontogenic, epithelial and developmental cysts of the oral cavity located in the midline of anterior maxilla near the incisive foramen, occurring in 1% of the population. Clinically, it is asymptomatic and with the lesion being detected on routine radiographs. However, many will present with one or more symptoms consisting primarily of swelling, drainage and pain.5 Tooth vitality is not affected by NPDC, however it is common to see evidence of root canal treatment when NPDC’s are misinterpreted as a periapical lesion, the differential diagnosis becomes clouded.6 In such cases, conventional radiographs may not be sufficient enough to diagnose ambiguous pathology.7

A 15-year-old girl patient presented to the Department of Conservative Dentistry and Endodontics, with a chief complaint of painless swelling on the anterior palate. The patient also complained of pus discharge from the swelling along with salty taste in the mouth since two days. There was no history of trauma. Clinical examination showed a swelling in the anterior palate with draining sinus (Figure 1 ). The swelling was fluctuant, round in shape, non tender with no discoloration of teeth was noted. Upon evaluating the vitality of the tooth with electric pulp tester, the associated tooth was found to be vital. Periapical radiograph showed a well defined, ovoid, unilocular radiolucency around the apex of tooth #11 with widening of periodontal ligament space (Figure 2). Afterwards, the tracing of sinus tract was done with number 25 gutta percha point. Radiographic examination revealed that the gutta percha was pointed in between the maxillary teeth #11 and 21 (Figure 1, Figure 2). Since, the sinus tract was not related to either of tooth #11 and 21. Hence, it was estimated that the lesion was non endodontic in nature. So, to confirm the diagnosis, the patient was referred for 3D diagnostic imaging i.e. Cone Beam Computed Tomography (CBCT). CBCT scan revealed that the lesion was non odontogenic in nature. It showed well-defined radiolucency in the region of nasopalatine canal approximately 9.7mm x 9.6mm in diameter in axial section with noticeable thinning and eroded palatal cortical bone with enlarged nasopalatine canal space in the sagittal section. Slight displacement of the teeth 11 and 21 was also seen (Figure 3). Based on clinical evaluation and 3D imaging, a diagnosis of nasopalatine duct cyst was considered. The treatment plan was established encompassing surgical enucleation of the lesion. All the investigations were done prior to the surgery. Under local anesthesia, the cyst was approached palatally followed by enucleation and cleaning of the surgical cavity. The flap was then repositioned and sutured (Figure 4).

Nasopalatine duct cyst is the most common developmental, nonodontogenic cyst affecting the anterior maxillary region. It was first described by Meyer in 1914. The nasopalatine duct lining is believed to degenerate; however, sometimes the epithelial remnant persists may later proliferate due to trauma, bacterial infections or mucous retention that gives rise to NPDC.8 In majority of cases, it is asymptomatic and diagnosed accidently on routine radiographic examination. But, in severe cases, it seems to become large, painless swelling in the anterior maxilla associated with discharge and burning sensation due to pressure on the nasopalatine nerve.6

Heart shaped radiolucency in NPDC is due to superimposition of anterior nasal spine seen in periapical radiograph can cloud the judgment and misdiagnosed as periapical lesion.6 It is essential to differentiate nasopalatine type cysts from radicular cyst.

Presence of intact lamina dura and a positive response to pulp vitality tests, suggests the lesion to be of non odontogenic origin. Whereas, in radicular cyst, the tooth becomes non vital due to necrosis of pulp.9 Furthermore, alteration of horizontal angulation (Clark technique) of periapical radiograph changes the position of NPDC whilst radicular cyst maintain its position around the apex of the tooth.10 Histopathologic examination can also confirm the diagnosis. 71.8% of NPDCs have stratified sqaumous, pseudostratified cuboidal or columnar type of epithelium, depending on the location of the cyst8 whereas radicular cyst is lined by non keratinized stratified sqaumous epithelium.11

Among the various imaging methods, periapical radiographs represents only 2 dimensional image of the dental lesion which can limit the accurate diagnosis.

Intraoral photographshowing the swelling on the anterior palate. 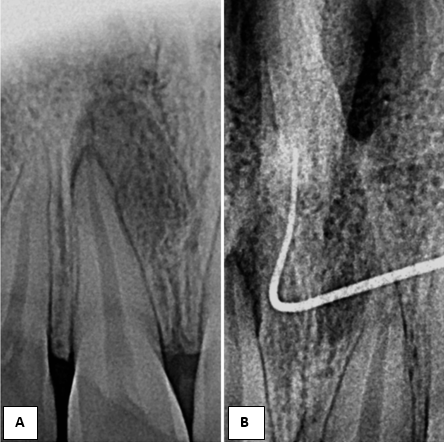 CBCT demonstrating the radiolucency at the maxillarymidline with eroded palatal bone and displacement of roots of teeth # 11 and21. 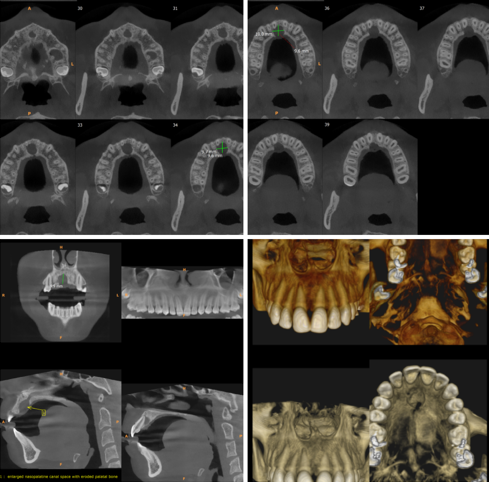 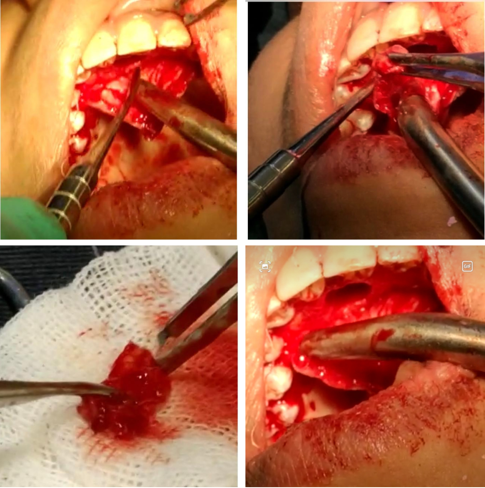 Among the various imaging methods, periapical radiographs represents only 2 dimensional image of the dental lesion which can limit the accurate diagnosis. Advanced imaging techniques like cone beam computed tomography (CBCT) can be used to differentially diagnose the nasopalatine cyst from other maxillary anterior radiolucencies like radicular cyst or granuloma.3 The treatment recommended for NPDC is the surgical enucleation. It has good prognosis if performed properly.12 Post operative complications may occur such as postoperative infection, hemorrhage, paraesthesia and pain. Although, the recurrence rate is low ranging from 0-11%, still follow up of the patient should be taken in consideration.12 The present case signifies the importance of correct diagnosis of such lesions which can be easily misinterpreted as periapical lesion leading to the inadvertent endodontic procedure in vital teeth.

Nasopalatine cyst is the most common developmental and non odontogenic cyst of the oral cavity with distinctive clinical features. It should be differentially diagnosed from the other radiolucencies present in the anterior maxillary region. With the advent of 3 dimensional imaging techniques such as CBCT, it allows better visualization of lesion boundaries for proper diagnosis and treatment of the lesion. The new diagnostic tools provide high-resolution images of oral structures, which help to make an initial diagnostic hypothesis and to plan surgery.