Traditionally immature necrosed teeth were being treated by apexification using calcium hydroxide and recently by using MTA. Drawbacks of this traditional approach were no continued root development and thin roots prone to fracture in future. Regenerative endodontics uses concept of tissue engineering to restore the root canals to a healthy state, allowing for continued root development and surrounding tissue. With the advances in tissue engineering and molecular sciences, the higher success rates can be achieved.

Tissue engineering is an interdisciplinary field that applies the principles of engineering and life sciences toward the development of biological substitute that restores, maintain or improve the tissue function or whole organ.1 (Langar and Vacanti)

Tissue engineering is ‘understanding the principles of tissue growth and applying this to produce functional replacement tissue for clinical use.2 (McArthur and Oreffo)

Nygaard-Ostby, 1961: Established a blood clot to use as a scaffold to re-vascularize tissue within the root canals of teeth

Hoshino, 1993: Use of triple antibiotic paste

According to their source

Autologous cells: Obtained from same individual to whom it will be replanted.

Allogeneic cells: Obtained from body of the donor of same species.

Xenogeneic cells: Isolated from individuals of another species. Eg: Animal cells in construction of cardiovascular implants.

According to their potency

Totipotent: Cells that can differentiate into new organisms. Eg. cells from early embryos.

Pluripotent: Cells that can differentiate into nearly all cells but not entire organism. Eg. Blastocyst

Different populations of adult stem cells in the oral region

Cells coated with surface receptors such as proteins have capability of selectively binding to other signalling molecules. Stem cells markers have ability to fluoresce or emit light energy when activated by UV light or Laser beam. They help in identification and isolation of stem cells.

These factors trigger the differentiation of selected mesenchymal stem cells into odontoblast like cells. Their functions are:

Scaffold is necessary to, 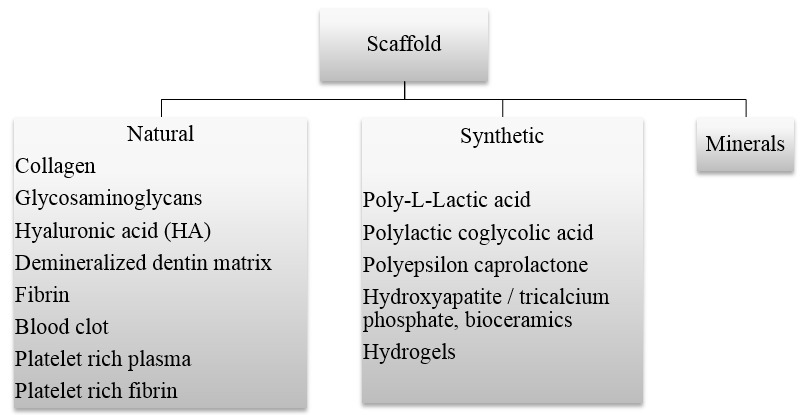 Traditionally immature roots were treated by apexification using calcium hydroxide or apical plug of MTA. This procedure resolved the signs and symptoms but no continued root development or pulpal nociception was seen.

Regenerative endodontic procedures (REPs) are biologically based procedures designed to replace damaged structures as dentin, root structures and cells of pulp dentin complex. It aims to,

Blood clot could be the first step in healing of damaged dental pulp, similar to role of blood clot in healing of other areas. (Eg. Alveolar socket after extraction) 9

According to clinical studies on regenerative endodontics mentioned in Cohen’s pathways of pulp 12th edition, 5

Initially, there was strong focus on disinfection and intentional bleeding into the root canal. But there is paradigm shift from “disinfect canals at all cost” to “disinfect while creating a micro-environment conducive for tissue engineering.” Other terms for regenerative endodontics are: Revascularization, Revitalization, Maturogenesis.

According to the American association of Endodontists (AAE), clinical consideration for a regenerative procedure, primary goal of regenerative procedure is elimination of clinical symptoms and resolution of apical periodontitis. Secondary goal is thickening of canal walls and continued root maturation. Tertiary goal is to have a positive response from pulp vitality. 10

Incompletely formed roots (often blunderbuss) present difficulty in cleaning and shaping of the apical portion of the root canal. Presence of thin fragile dental walls may prone to fracture during instrumentation or obturation of root canal which possess risk of extruding materials into periradicular tissues. To treat this, traditionally apexification was choice of treatment which means creating apical barrier to prevent extrusion. But major disadvantages of apexification procedure are:

Ideal case selection would be young patients with immature infected teeth where cessation of root maturation has occurred. Three measures advocated by American Association of Endodontists clinical considerations for Regenrative Endodontic procedures are.

Minimal or no instrumentation of dentinal walls

Regenerative endodontic procedures advocate minimal or no filing of the canal. Although some studies suggest formation of biofilms and penetration into dentinal tubules in histologic studies. 5 Some degree of mechanical debridement may also be required to disrupt biofilms on canal walls for continued root maturation. 11

Disinfection of the root canal system

Use of 1.5% NaOCl has minimal destructive effect on SCAP whereas use of 17% EDTA increases SCAP survival. 12 According to Galler 2015, EDTA demineralizes dentin which exposes dentin matrix which in turn releases growth factors. 13 Irrigation with Chlorhexidine should be avoided due to its cytotoxicity to stem cells. 14

Placement of an intracanal medicament

AAE Protocol is to use Triple Antibiotic Paste (TAP) at concentration no greater than 0.5mg/ml (Conducive to stem cell survival). TAP contains Metronidazole, Ciprofloxacine and Minocycline in the ratio 1:1:1.

Creation of blood clot / protein scaffold in canal after resolution of symptoms. REP involves lacerating periapical tissues to initiate bleeding or use of PRF / PRP.

Effective coronal seal is of importance after formation of blood clot. Premeasured piece of Collaplug on the top of blood clot to serve as internal matrix for placement of approximately 3 mm of MTA followed by 3-4 mm layer of GIC bonded by Reinforced composite over it.

American association of endodontists clinical consideration for a regenerative procedure

The goal of REP is to have continued root development and reestablishment of pulp vitality. REP resulted in 31.6% increase in radiographic root area. (RRA) 16

According to Jeeruphan 2012, Survival rate of revascularization is 100% versus 95% for MTA apexification and 71.2%for calcium hydroxide apexification. 17

Collapse of MTA material into the canal

This can be managed by keeping Collaplug above the blood clot and waiting for atleast 15 minutes after inducing bleeding.

Teeth requiring retention in canal space by using posts are contraindications for REPs.

Stem cells of dental origin are:

SHED: Can differentiate into odontonblast-like cells that form dentin like structures.

SCAP: Found at apices of developing teeth at junction of apical papilla and dental pulp. They can undergo odontoblastic, osteogenic, neurogenic differentiation.

It is the means of delivering genes for growth factors, morphogens and ECM molecules to somatic cells of individual resulting in therapeutic effect.

Recent studies done in the field of Regenerative endodontics

Regenerative endodontics present a new era in biological and clinical endodontics. Further research in the area of stem cell based pulp engineering will allow for true regeneration.

The author declares no potential conflicts of interest with respect to research, authorship, and/or publication of this article.

A J Smith Vitality of the dentin-pulp complex in health and disease: growth factors as key mediatorsJ Dent Educ200367667889

American Association of Endodontists (AAE) (2016) ClinicalConsiderations for a Regenerative Procedure2016

Get article permission for commercial use