Ex-Vivo evaluation of Nano-MgO in the elimination of Endodontic pathogen- E. faecalis

Background: Magnesium oxide (MgO) nanoparticles due to their antimicrobial properties and ability to survive under harsh conditions have become an area of interest in the field of biomedical sciences. The aim of the study was to evaluate antimicrobial efficacy of Nano-MgO in the elimination of endodontic pathogen Enterococcus faecalis.

Materials and Methods: Minimum inhibitory concentration (MIC) of Nano-MgO and sodium hypochlorite against E. faecalis was calculated using broth dilution method. The antibacterial efficacy of Nano-MgO in elimination of the pathogens was seen using an ex-vivo model of decoronated teeth which were experimentally infected. The antibiofilm activity of the tested antimicrobial agents on E. faecalis biofilms was determined quantitatively by counting the colonies on Mueller-Hinton agar plates and by evaluation under scanning electron microscopy (SEM). The data analysis was done using one way ANOVA and the intergroup comparison by student –t test.

Results: MIC concentration of Nano-MgO was observed at 10mg/ml for E. faecalis. Mean values of colony forming unit (CFU) count was maximum for normal saline, followed by Nano-MgO and sodium hypochlorite with a significant difference between all the three groups.

Conclusion: The results of the study reveal that Nano-MgO has the potential to be used as an alternative irrigating solution in endodontic therapy.

E.faecalis is a Gram-positive cocci and a spore forming facultative anaerobe which is now considered as a predominant organism in secondary infections.1, 2 A prevalence of E.faecalis ranging from 24% to 77% has been demonstrated in root- filled teeth with peri-radicular lesions.3, 4, 5 To ensure the success of root canal treatment, complete debridement and disinfection of the canals play a major role and it has been shown that mechanical instrumentation alone cannot eradicate the bacteria from the root canal system. 6, 7 Even after thorough mechanical preparation, root canal can harbour residual pulpal tissue, dentinal debris and bacteria, inside the irregularities of root canal systems, therefore, the use of irrigant solutions in combination with mechanical preparation of the canals should be considered. 8

The most common irrigant employed in endodontics is sodium hypochlorite (NaOCl). 9 However, it has certain drawbacks including cytotoxicity 10 bad odour and taste 11 detrimental effects on the physical properties and composition of dentin12, 13 and a negative impact on the cutting efficiency of nickel-titanium instruments. 14 Its inactivation by dentin, collagen and other organic compounds and insufficient ability to penetrate dentinal canaliculi results in decreased long – term antibacterial effect. 15

The present study was planned to compare and evaluate antimicrobial efficacy of Nano-MgO with sodium hypochlorite and chlorhexidine gluconate in elimination of E. faecalis using an ex-vivo model of decoronated teeth which have been experimentally infected.

Sample size- 45 teeth were collected from the department of oral and maxillofacial surgery, Dr. Harvansh Singh Judge Institute of Dental Sciences & Hospital, Punjab University, Chandigarh with the inclusion criteria of intact, unrestored single-rooted teeth or teeth extracted either for orthodontic or periodontal reasons. Teeth with caries, surface cracks or fracture were excluded. The ethical clearance was obtained from the institutional research ethics committee. Written informed consent was taken from each subject as per ICMR guidelines.

Nanoparticles of magnesium oxide (MgO) were obtained from sigma Aldrich (St. Louis, MO, USA). A stock solution of 1g/L was prepared by adding 1g nano powder to 1 L ultrapure water. The nanoparticle stock solution was diluted with ultrapure water to prepare different concentrations of Nano-MgO solutions, i.e 1.25mg/ml, 2.5mg/ml, 5mg/ml, 10 mg/ml, 20 mg/ml and 30 mg/ml and sodium hypochlorite (2.5%, 5.25%) was also made. The irrigant solutions were tested for their MIC against E. faecalis (ATCC 29212) by broth dilution method.18 Sterile tubes containing 2ml of Brain heart infusion broth (BHI) were taken and same amount of these solutions were added to these tubes along with 100µl of E. faecalis inoculum (the bacterial strains were prepared to obtain the 0.5 McFarland turbidity in BHI broth). The tubes were kept in shaker incubation for 24 hours at 37°C. the turbidity of the tubes was then evaluated and spectrophotometric analysis done. The optical density was measured at 600nm by Orion aquamate 8000 UV-VIS spectrophotometer.

Ex- vivo model for assessing Nano-MgO efficacy in the elimination of E. faecalis.

Sample preparation for antimicrobial evaluation- tooth samples were decoronated using diamond steel discs and a specific length of 15 mm was obtained for each root. Root canal instrumentation was performed and 1 ml of 5.25% sodium hypochlorite was used to irrigate the canals. Instrumented canals were washed with 17% EDTA solution and finally washed with saline solution. Epoxy resin was used to seal the enlarged apical foramina to prevent bacterial leakage. Tooth samples were then sterilized using an autoclave for 30 minutes at 121°C. 10µl of 1.5×108 CFU /ml suspension of E. faecalis was used to incubate the root canals using sterile 1 ml syringes.19 The contaminated tooth samples were incubated for 48 hours and divided into three groups.

A size of 30/.06 sterile paper point was selected to sample the bacteria from the root canals.19 The paper points were immediately transferred to tubes containing 2 ml normal saline and serial 10 fold dilutions made. 100 µl of the sample from each tube was pipetted and spread onto Mueller Hinton agar plates and incubated for 24 hours at 37°C. The colonies were then counted to give mean CFU /ml.20

2.3 Scanning electron microscopic (SEM) analysis: Dentin sections were placed for 48 hrs in broths containing E.faecalis and the different irrigants. They were then rinsed with Tris buffer and fixed with 10% glutaraldehyde. The samples were air dried at room temperature for 24 hours. SEM analysis was performed on the dentin sections using scanning electron microscope JSM -6100 with stub at central instrumentation laboratory, Panjab University, Chandigarh.

The effect of Nano-MgO on E. faecalis biofilm grown inside the root canals showed that exposure to Nano-MgO lead to a decrease in viable cell counts in E. faecalis biofilm. The saline group had the highest mean bacterial count of 666.67±317.73 CFU/ml. On being treated with Nano –MgO, the bacterial count reduced to 173.33±148.65 CFU/ml. Exposure to sodium hypochlorite also showed a decreased bacterial count of 66.67±89.97 CFU/ml. On comparing sodium hypochlorite and Nano-MgO, significant difference (p<.025) was found between the two groups (p<.025). [Table 1, Figure 2].

The SEM analysis of E. faecalis biofilms on dentin surface showed marked reduction in bacteria on dentin irrigated with 5.25% sodium hypochlorite and nano-MgO compared with the control group irrigated with normal saline. The biofilms treated with magnesium oxide nanoparticle solution and sodium hypochlorite solution exhibited significant decrease number of bacterial cells adhering on the dentin surface as compared to normal saline. This is clearly visible in [Figure 3].

Broth showing turbidity of different concentrations of Nano-MgO solutions with highest turbidity in the control group, shown by the arrow. 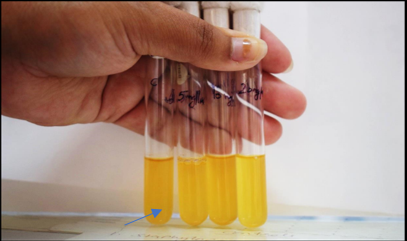 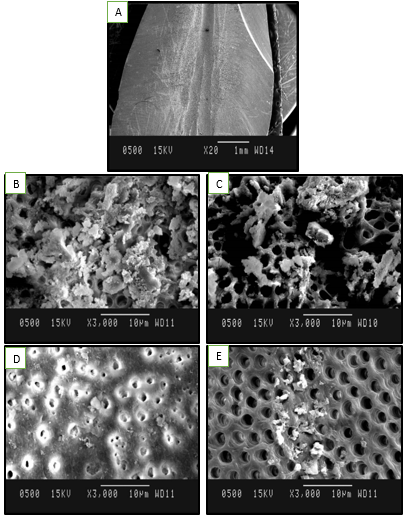 E. faecalis is an opportunistic pathogen and is shown to have a high prevalence ranging from 29% to 77% in cases of persistent periapical disease. 3, 4, 5 Oral enterococci constitute the highest percentage of virulent genes and ability to form resistant biofilms.21 Endodontic infections with E. faecalis are probably not derived from patients own microflora, which indicates that in these infections E. faecalis is of exogenous origin.22 Due to increasing antibiotic resistance in E.faecalis strains the use of alternative antibacterial agents such as metallic nanoparticles have prompted a renewed interest.23 In the present study nano-Mgo solution is used as an endodontic irrigant. Nano-Mgo has the advantages of non-toxicity, pepared from readily avaliable resources, economical and therefore has considerable potential as a bactericidal material. 24

Broth dilution method was performed to determine the susceptibility of E.faecalis against magnesium oxide nanoparticles. Optical density measurements (OD) were taken at an absorbance wavelength of 600nm (OD600). The spectrophotometric approach correlates with the cell concentration and presents inherent advantages of being rapid and non-destructive. In this method, antimicrobial efficacy of different concentrations of nano-MgO ranging from 5mg/ml,10mg/ml and 20mg/ml,sodium hypochlorite (2.5% and 5.25%) was evaluated against E.faecalis respectively. It was observed that MIC of MgO nanoparticles is 10 mg/ml for E. faecalis and 5.25% for sodium hypochlorite. Both of them are effective against Gram-positive cocci, E. faecalis. The results obtained for nano-MgO solution by broth dilution method are contrary to the ones obtained by Monzavi et al, 2015.15 They reported fungicidal activity of 10mg/lt nano-MgO with a size range of 70-150 nm against oral candida albicans using a tube broth dilution assay for endodontic applications. Another study has shown MIC of 10mg/ml with MgO nanoparticles for E.coli and S.aureus.24 Different methods including microtitre assay, macro dilution assay in test tubes and agar diffusion assay have been used to quantify antimicrobial activities of nano-MgO. The antimicrobial activities of nano-MgO against different bacterial strains are not much comparable. The difference in particle size of commercially procured nanoparticles and the ones prepared chemically through different methods also contribute to antibacterial efficacy shown against a particular organism by these nanoparticles. The average size of MgO nanoparticles prepared chemically in the laboratory ranges between 20-30 nm, whereas size of nano-MgO procured commercially is larger, range is 50-100 nm.

This study demonstrates for the first time that nano- MgO disrupts E.faecalis biofilm. The results of study show that nano-MgO particles have a potential to be used as an endodontic irrigant solution whenever toxicity, allergic reactions and irritation to periapical tissues is a concern when using other irrigating solutions. Higher concentration of nano-MgO may be tested for its bactericidal activity. However, toxicity studies on human tissues at higher concentrations need to be evaluated.

A Abbaszadegan A Khayat M Motamedifar Comparison of antimicrobial efficacy of IKI and NaOCl irrigants in infected root canals: An in vivo studyIran Endod J2010531016

Get article permission for commercial use